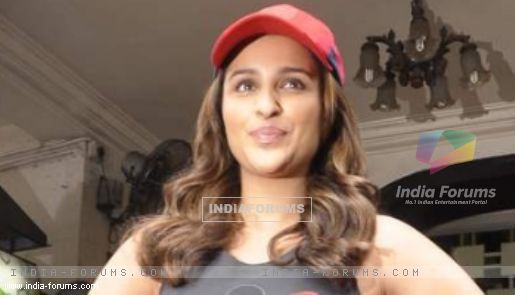 Actress Parineeti Chopra unveiled a romantic track titled "Sajda" from her forthcoming film "Kill Dil" Wednesday, which is also her birthday. She said she felt like a typical Yash Raj Films' heroine while shooting for it.

"This is my favourite song ever. This had been shot in some beautiful locations. I felt like a typical Yash Raj Films' heroine while filming for the song, though I didn't wear a chiffon sari in it," Parineeti told reporters at the event.

For the first time Parineeti is working with Govinda, one of the most entertaining stars of the 1990s, and she finds him "amazing".

"I didn't share too many scenes with him (Govinda) as the film is about two friends - Ali and Ranveer. But yes, whatever scenes I did with him, I realised he is so experienced. He is so cool and he is amazing," she said.

The actress also celebrated her birthday with the journos at the event.

Talking about her birthday, she said: "I have had some wildest birthdays when I used to be in England. I hope it becomes better and better each year and thanks for coming here today."