The charming Parakh Madan who was earlier seen in Star One’s Saathi Re has now got a image makeover, and will portray the very gutsy Police officer in Zee’s upcoming show Monica Mogre’s Case Files..

Here is the lady in conversation… 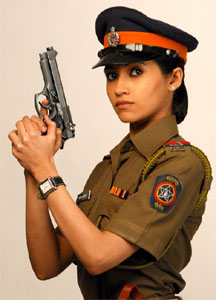 Featured Video
You are coming after a long break on television?
This break was not supposed to be so long. I just wanted to go on a break for 2-3 months, but it somehow got prolonged because Monica Mogre was initially slated for Zee Next. Even though the channel got into trouble, we are lucky enough to get a shift to Zee TV. Besides, we have a lovely slot for the show.

I’m glad that I stuck to this show even though it took a year to come on air.

Besides shooting for the show, what else did you do?
In the initial three months of my break from television, I gave my time to a movie of Anurag Kashyap’s titled Dev D. I’m playing an important and surprising element in the flick. From June 1st, I started shooting for this show.

How has been your experience been so far?
The experience so far has been amazing. I have finished the shoot of the first story which is with Mahesh Manjerkar. In the first story itself, I had so many angles to explore myself as an actor, including bit of family drama, emotion, action etc. As an artist it was thrilling.

Tell us about your character as Monica Mogre?
She is a cop with Mumbai Police and is in the homicide department. Monica is a person who knows what she wants from life. Her folks back home are not very supportive, like her mom was against her getting into this profession, and it was her father who supported her. She also has to face resistance from her seniors in office. Keeping all that in mind she is still a strong individual.

What kind of preparations you have done for the show?
There is nothing in particular. I come from an Army background and have seen people and my relatives in those uniforms all the time. Having been brought up in that kind of a disciplined manner, the body language a cop should have comes naturally to me (smiles).

Apart form that, while I was graduating in Delhi, we had to go thro' weapon training where we were taught how to operate real weapons like SLR’s, pistols and barricades. That training helps me here.

How was working with Mahesh Manjerkar? What did you learn from him?
Maheshji is a fabulous actor. Initially I was bit scared of working with him, and hoped that I did not make mistakes that would annoy him; but he is a very cool-minded actor.  Even though he is a senior artist, he is very supportive. I never felt any cold vibes from him, and  I am grateful to him.

What according you is the USP of the show?
There are lots of elements. I know there had been many shows on similar lines, but this show includes family drama also. The parents in the show are shown to be different.

Isn’t it similar to the show Salaam Zindgi, that came and went off air?
Not at all!! Salaam Zindagi was the story of a girl who did not wish to become a cop, but went further in that line for her grandfather’s wish. That show had an academy and a training period.
Monica Mogre is a show that has nothing to do with the earlier serial. Here Monica is already a cop and here there is no training period. Salaam… was one drama and this show is a short stories with case files which is different.

Are there any plans to take more shows?
For now I’m waiting for the show to come on air. After that I’ll see.

For a Video Interview of Parakh Madan on her stint as Monica Mogre in the new Zee show, CLICK HERE...

13 years ago but let me tell u guys that type are show does''t wokr on tv..rember we have same show from sonty TSZ

+ 5
13 years ago The concept is different but if its well made it will work !!

+ 2
13 years ago oh my god i didnt realise its her...totally diff role to which she played in saathi re...all the best to her