Star’s Karam Apna Apna seems to be facing problems with the male protagonist from day one. First with Iqbal Khan being replaced by Yash Tonk, followed by Yash Tonk playing a double role in the story, and now with the main lead getting knocked off the show. Though Yash remains in the show as the twin, his main character - Shiv will be shown as dead. This has upset the entire cast and crew of the show,but the person who seems to be most affected is Pallavi Subash, who plays the female protagonist - Gauri, opposite Yash Tonk. Pallavi didn’t seem to the handle the story track well. 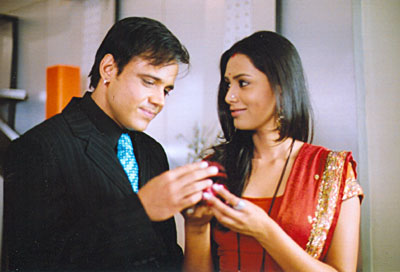 Featured Video
Pallavi broke down on the sets while rehearsing her dialogues for the death scene and even locked her self in the vanity van, refusing to shoot the death scene. For her the whole idea of the character with who she started her debut show not being there, was unimaginable. When we asked Pallavi about her whole take on  Shiv’s death, she replied, “Actually we are all upset that the character of Shiv is being killed. Shiv is a very nice and cute character. For me, Shiv is different, we have always been together. We have worked together from Day one, and now they are killing this character, that too brutally. I am really depressed, and so are all in the unit…”

Despite being told by the creative team that Shiv's twin Samar will continue to be part of the show, Pallavi could not be pacified, “For me, Shiv's character is more important. Yash Tonk will still be there as Samar. But I will miss Shiv. I am really upset. We all wish that the character will come back some day.” says the emotional Pallavi. Pallavi still hopes that Shiv might return in the story line, “As of now, the creatives have thought of a story after his death. So let us see, we all hope that he will get back one day…”

Pallavi surely cannot seem to get out her character. Will Pallavi be able to convince the creative heads to bring back Shiv? Keep Watching Karam Apna Apna on Star Plus to find out more.

14 years ago I like gauri's acting
she is nice
thanxx!!

14 years ago I just love her acting and i feel so sad that she had to take it so personally but yeah i guess it does make a difference!

14 years ago aww pallavi is chooo shweet!and ektha plz dont kill shiv i dont want him to die!i dont think any1 wants him to dieee!!!GRR EKTHA!

14 years ago Awwwww.. That's bad.... Nice character, but always the dead return is the moral of the shows, so maybe Sameer will become Shiv one day.. Who knows

+ 2
14 years ago I think its very stupid to kill shiv which means this is going to be the end of gauri-shiv jodi.Actually in serial when someone dies they always come back like om did in KGG so nothing to weep over.

+ 2
14 years ago i agree with pallavi itz so sad i luv shiv gauri hey ekta u back sujal,kavy,tulsi,etc etc so plz come back shiv also.

+ 3
14 years ago It really makes no difference to be if this shiv character is there or not..for me Iqbal Khan was my first n last shiv kapoor...the character shiv was dead 4 me wen Iq left!!

Neways i wish pallavi all the best..she is truely a great actresss...i feel the storyline wud hav been diff if Iq was there and this step wudnt have been taken by creatives!

+ 3
14 years ago i also think it's been very stupid to kill off Shiv!! he was soo good!
i loved Shiv-Gauri jodi!

i've seen the detah scene and it was really too much to handle! so cruel!
and i don't think there is any chance shiv will be back!

14 years ago awww thats chhoo sad!
i feeel so bad 4 her!
but we all will miss Shiv's character a lot!:(