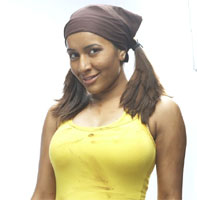 Palak, the girl with lots of adjectives in her mouth is back again to entertain everyone with her trashy antics on Iss Jungle Se Mujhe Bachao which airs on Sony Entertainment Television. And guess what? She's already started with her nautanki!

Says our source, "In the rain forests of Malaysia, where everyone is running for cover from creepy crawly things, not to mention the rain, Palak is complaining that she is not able to reveal her body. She is thoroughly disappointed that the dress code does not match up to her expectations."

We wonder if Palak is aware of the skills needed to survive in a tropical rainforest. Surely, a sexy figure and a bratty mouth do not qualify for that! And is Palak acting this way to give a fake impression to her competitors?

To find out catch 'Iss Jungle Se Mujhe Bachao', Monday to Thursday at 10 p.m. and Fridays at 9 p.m. only on Sony Entertainment Television.

13 years ago Wow an indian version of paris Hilton! wasn't one version enough? this show reminds me of Total drama island and she reminds me of heather..

+ 3
13 years ago palak eager to wear revealing clothes....it's her wish.But nobody wants to see her like that or in any other way. Stupid girl.

13 years ago she spoils every show..........firstly she spoiled roadies n now ijsmb

13 years ago can someone please tell me from which angle is palak sexy.

+ 2
13 years ago nt 2 mention she is mahaan in faking, manipulating n opening her big mouth...
thx

+ 4
13 years ago not Nat Geo, this is a waered down vesion of I'M A Celebrity, Get Me Out Of Here...airs on Star World in India right now...

and i'm sorry, i've never been able to stand this one, ever since her Roadies days...no offense meant...but i really don't like her much...