Hema Malini is back on the Silver screen not as an actor, but as a Producer for the upcoming show on COLORS, Maati Ki Banno.. 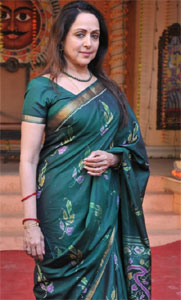 You are returning to television production after 8 years, how do you think television has changed all these years?
When I was making Nupur, the scene was completely different, because Doordarshan was the only channel that we had. I really enjoyed doing that show wherein I did the production, direction and acting too, and even dancing. Even though the show was just for thirteen episodes, it is still remembered as a lovely show and people still talk about it. During those days, I wanted to make more shows, but that was a transition period which was not very encouraging. I was also not able to meet different channels and talk to them, because it was a tough procedure to meet people from the channel. Then I was engaged in my political life, for which I had to dedicate my time. When my term got over last September, the work for the show started immediately the next month. That's what we say, when one door gets closed, God opens another for you. Because after the political involvement, I had got proposals for making movies too, after which I decided to do Tell Me O' Khuda.

Are you apprehensive about the 6:30 slot that COLORS has offered?
We are looking to develop this new time slot and I am sure the show would work well. The story is a strong one and I am sure that a new show and concept like this will definitely impress the audience. The rest is in the hands of God.

Why Colors?
I watch Colors a lot, right from the day it was launched. I like all the shows in the channel and I also participated in the Dancing Queen show. That's why I have this association with the channel and with all the girls and the wonderful people who work here.I  really liked all of them. When I heard the story from Anand, I really liked it and when he asked which channel, I said, why not we talk to Colors TV. They too instantly agreed and that's how the whole thing developed.

What made you choose the title 'Maati Ki Banno'?
Well, you tell me, how do you like the title? (Laughs) I felt that is a nice title which makes you feel like you are connected to Mother Earth. It makes you feel that you have to understand Nature and you have to heal the earth. I have done Reiki also, in which they teach to heal Mother Earth and also to heal each and every living being; even the plants. My story is about Maati ki Banno, the daughter of the earth. Somehow I feel nice about the whole name, and it connects well with all.

How challenging is it to be the Producer of a daily soap?
It is very difficult and tough, but fortunately I have my whole team working very hard. At times, they work 24 hours as I am not always able to fully dedicate myself here. However, the channel is always there to take care of them.

How far do you have the hold on the show?
I will not keep a hold on the story but as it is develops, if I feel something is going wrong, I will definitely intervene. I do not want my story to have too much of gruesome violence in  it. In the Parliament, we keep raising the issue of domestic violence and few other issues like dowry and how to save the girl child. So we would always want to maintain the dignity of the show.

What is the social message conveyed in the show?
It shows what a girl can do to counter domestic violence and come out with flying colors.

Do you think your association with the show would help you gain TRPs?
It's not my presence that will gain the show its TRPs because I am just producing the show. The TRPs and the rest of the things depend on the performance, the story and how it develops. If it goes good, then the TRPs will be great and if it doesn't, then it will affect the TRPs.

Were you never tempted to direct?
I was not tempted to direct daily soaps because it is very tiring and I have tried my hand at it with Women of India. I was not so keen in acting in daily soaps too because you have to dedicate your days and nights for the show. Hats off to all those girls who do their work 24X7 as the show now runs till Friday. I did Damini for Sahara and I requested them to relieve me from it because I could not do anything other than it when I was on the show.

The storyline of Maati Ki Banno reminds us of the Karishma starrer movie Shakti; is it the same?
The basic storyline is inspired from the movie.

There have been similar shows with the backdrop of rural India; what is different in this?
I think it is always nice to have rural India as the backdrop of the show. The transition that I was talking about was that all our current shows portray modernity. With Balika Vadhu showing the village atmosphere and the typical language and nativity of the village land, it feels really good. I strongly feel that when there are so many traditional costumes in our country which are typical of each state, why do we need to go for too much modernity? Our culture needs to be highlighted. Colors takes us to the interiors of those lives.

How was the experience of shooting in Mauritius?
We shot the beginning of the story from there as the script demanded it and then the journey to Bihar is shown.

Do you have a direct say in the casting of the show?
We do suggest but mainly the channel decides on that aspect. Both the leads are new and we wanted to bring in the freshness.

We heard the production house had few creative differences with the channel earlier which resulted in delay. You were forced to change your Director too?
When we do a show, we have to drag the story for a long time. Directors may have to change  as it is extremely difficult for one person to continue for so long. So, it is better to have multiple directors for the show.  There were no creative differences as such. He presents the show in his own way.

What are your expectations from the show?
I would like the show to work just like Uttaran, Balika Vadhu, Laado and other shows in Colors TV.

Do you think shows like Raakhi ka Insaaf should be aired?
I think there are people who like such shows too but personally, I do not watch it.

beetaurus 9 years ago All the best for your new serial. My best wishes.

Shaina_b 9 years ago The film was a flop and is only remembered for the Ishq Kameena song of SRK!!!!

renup64 9 years ago Awesome news! wish you best of luck for your new show.....

Pirated_Fun 9 years ago I want the show to work ...... Presentation is good

rabzonedge 9 years ago good answers ...best of luck for ur new show..

simran1285 11 years ago Praina Hard Kaur is a singer, some of the songs listed like lucky boy from Bachna Ae Haseeno, SIngh is King etc are sung by her.

I like hard kaur she''s got the right attitude and strength I wish her all the best. I am rooting for her during JDJ. Loved her song Glassy

19 Shows & Films To Look Out For Streaming in October on ...
2 minutes ago