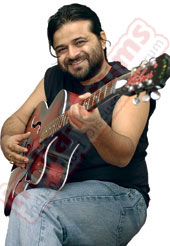 Things couldn't get any better for music composer Pritam Chakraborty. After Jab We Met, Pritam considers Kareena as his lucky mascot. To prove it he has composed a rocking new item song Theek hi theek hai for Kareena in Priyadarshan's Billo Barbar. This would be Kareena's second item song with Shah Rukh Khan after Yeh mera dil in Don.

But as Pritam stresses, that was a re-mix. His item song for Kareena is entirely original. Yes, Pritam has now decided to do as much original work as possible. And although he is not the film's music composer Pritam has just composed a rocking-haunting sufiyana theme song for Mani Shankar's espionage drama Mukhbiir. It's turned out to be among Pritam's best works yet. The song to be filmed on Sammir Dattani soon, is expected to be an out-and-out chartbuster. And hey, it's original!