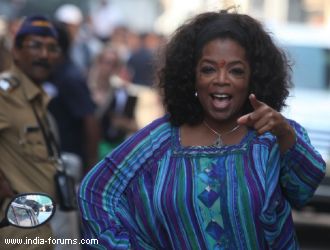 Oprah arrived here around 9 a.m. and went straight to Ma Dham, a widows' rehabilitation centre. The photo-journalists had taken positions early in the morning and wanted to take pictures, but were prevented by Oprah's security guards.

This led to exchange of blows, according to eye witnesses.

Later, Superintendent of Police (Mathura) Ram Kishore intervened and a compromise was worked out between the two sides.

It was later learnt that the local authorities had sent a report to the state home department that such visits without prior information could cause problems.

The scuffle delayed Ophra's arrival in Agra -- her maiden visit -- where she was to shoot at the Taj Mahal.

Once again the media persons began pushing one another to get a better shot of her at the monument.

Those accompanying her said Ophrah was a little irritated, but later she tried to be friendly with the media persons who had been waiting since morning at the site.

Oprah spent more than an hour at the Taj while her camera crew captured the 17th century marble marvel from various angles for her new talk show.