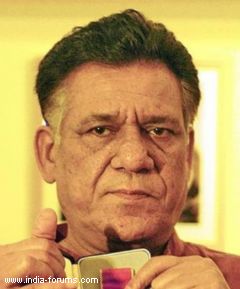 New Delhi, Aug 29 Actor Om Puri has apologised for calling politicians 'uneducated' and 'incompetent' during his speech in Ramlila Maidan late and says his choice of words was inappropriate.

'I respect the parliament and the costitutional body. I am very proud to be an Indian. It was wrong on my part to use such terms. I wasn't drunk, I was just emotionally charged, such things do come from mouth...even our politicians at times, in a fit of anger, use such things,' Om told CNN-IBN.

'I would love to be there (in the parliament) to explain my emotions... the forum which leaders like Sardar Patel and Jawaharlal Nehru have been a part of. If they (parliament) are still angry with me I will take whatever punishment they give me,' the actor added.

The 60-year-old actor created a stir Friday with his speech attacking politicians. He told the thousands gathered that he feels 'ashamed when an IAS or IPS officer salutes a ganwar (illiterate) who is a neta (political leader)'.

Lok Sabha Speaker Meira Kumar said she is considering a privilege motion against Om for his 'derogatory and defamatory' remarks.