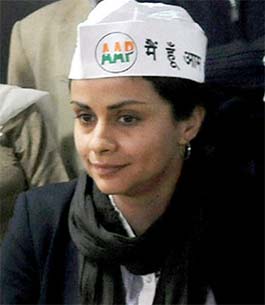 Gul Panag's defeat as an Aam Aadmi Party (AAP) candidate from Chandigarh in the Lok Sabha election, hasn't dampened her spirits. She says she will continue to work with Arvind Kejriwal's team.

Having lost to veteran actress and Bharatiya Janata Party nominee Kirron Kher, the spirited Gul said: "I am most certainly going to continue in politics. I wasn't here for just one election season. I am in it for the long haul."

Gul has no quarrel with the way the mandate went in her constituency.

"Chandigarh has exercised its franchise in a peaceful and decisive manner. It has given the Bharatiya Janata Party a clear mandate. I'm absolutely at peace with the mandate. I'd like to thank the people of Chandigarh for their love and support," she said.

The former beauty queen feels she and AAP did well for a first timer.

"It was our first election in the Union Territory and having won one-fourth of the vote, I feel we are a voice that cannot be ignored."

Gul is very hopeful about the future.

"I do hope the National Democratic Alliance is responsible with the mandate that the people of India have bestowed on it, and that they're open to an inclusive and participative governance," she said.

As for her own role within her party and her party's role in the process of nation building, Gul said: "We will continue to conscientiously serve the people of Chandigarh and remain committed to our fight against corruption in India."

Monalisa is back with Gul Khan's new show on Colors