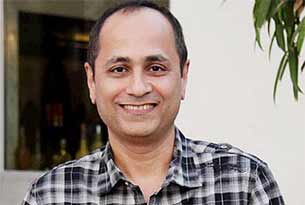 He juggles two different roles but Vipul Shah believes in doing one thing at a time. If he dons the director's hat, his focus is on his craft and as a producer, he ensures he doesn't get in the way of his directors.

"If I am producing, I enjoy it the most, when I am a director, then I can't think of any production work," Shah said to a query about juggling his "roles" during an interview to IANS.

"When I am producing, I don't think of becoming a director. None of my directors, who have worked with me, will complain that I chew their brains or interfere in their job.

"My job as a producer is very different. A director is the mother of the film... who creates it and a producer is the father who runs the entire show. I enjoy both," said the director and producer of "Namastey London" and "Waqt - The Race Against Time".

The filmmaker also produced hits like "Singh Is Kinng" and highly-acclaimed "Force" helmed respectively by Anees Bazmee and Nishikant Kamat.

But despite tasting successes, he feels that a producer's job is "thankless".

"Yes, it is a thankless job in a way," Shah said. "It's not just about the producer, everybody who works behind the curtains to a certain extent has a thankless job because people want to see who is in front of the camera."

"People within my team know what I contribute to a film and as long as they are happy with me, I am done with being a producer. At the end of the day what matters is that your team should understand and appreciate what you are doing," he added.

When it comes to the team, Shah has enjoyed a formidable long stint with Bollywood star Akshay Kumar, who has featured in all his directorial ventures except for "London Dreams".

He describes their journey as "fantastic". The duo have teamed up once again for forthcoming terrorism-based action thriller "Holiday - A Soldier Is Never Off Duty" and takes pride in saying that this is their "sixth film together and that four out of five films have been successful".

"As long as you are making better films together, you feel like working together again and again. My relationship with Akshay has reached a stage where we constantly want to do better work together. It has become stronger by the day," added the filmmaker.

Shah's retro drama "Action Replayy" with Akshay had backfired, but in his defence the filmmaker argues that "nobody can have a 100 percent track record and I am no different".

"Be it Raj Kapoor or the greatest of the great people - they have given flops. The effort should be to learn from the mistakes and move ahead and make successful films. 'London Dreams' was not a flop, it was an average film.

"'Action Replayy' was the only film that didn't do well. After that I did 'Force' and 'Commando', which were hits. It's part and parcel of your life and I think the audience loves me as producer, director or whatever," he added.

Releasing Friday, "Holiday..." may be on terrorism, but it is different from the other films from the genre as director A.R. Murugadoss' narrative focusses on sleeper cells and how quietly they merge into their target society before unleashing havoc.

Shah says the film's team is very "solid" and the story is engrossing.

"The basic story is a very intelligent thriller based on sleeper cells. We all know that India is a terror-affected country and it's because of the network of the sleeper cells, which plans the possibility of attacks to be carried out," he said.

"These sleeper cells are so merged within our society they could be anybody - your neighbour, my driver, watchman. You can't find out who are sleeper cells because they are so silent about what they do and that becomes the most dangerous form of terrorism because you don't know the enemy and how to find them," he said.