View Profile
Ask any rising star in the film industry to list their dream directors whom they would love to work with some day, and chances are that the list will probably include Mani Ratnam. Though this 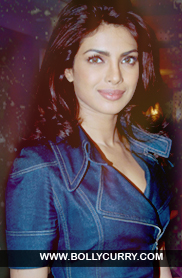 very opportunity is knocking on her door, Priyanka Chopra is apparently too swamped to avail of it at the moment.
What, she said no to THE Mani Ratnam? Not so fast...
A look at Priyanka's schedule reveals that the actress is indeed tied down with her current projects Agneepath and Burfi, both of which have already been accumulating high expectations. Given that both of the films are currently in production, she is unable to set aside time and meet with his team.
After seeing Priyanka in Saat Khoon Maaf, the director was convinced that only Priyanka will be able to do justice to the character in his future Tamil film, Veerudu, even though the actress has no prior experience in that regional industry.
The film is to be set in 1500 BC and is based on the Tamil novel Ponniyin Selvan, a story which focuses on the courageous warrior Vallavarayan Vandiyatheyan and King Aditha Karikalan. Already committed to the film are Southern superstars Vijay, Mahesh Babu and Arya and Anushka Shetty. While the courageous warrior is to be portrayed by Vijay, the King's character goes to Mahesh Babu. Anushka is said to be essaying the character of their sister.
Sources claim that Priyanka is, in fact, very excited about this prospective career opportunity. She plans to meet the director personally as soon time permits.

We only hope that she finds time before time runs out, lest this unique offer is passed on to someone else and Priyanka misses out on a chance to broaden her reach beyond B-Town.