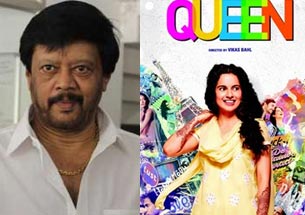 Actor-producer Thiagarajan, who has acquired the southern remake of Hindi blockbuster "Queen", says there's no pressure on his actor-son Prashanth to play the male lead in the movie.

Rajkummar Rao played the lead in "Queen", which featured Kangana Ranaut in the lead role.

"Prashanth is busy with other projects. I'm not going to pressurize him to be part of the remake. His presence would definitely add some value to the project, but the choice to act or not is at his discretion," Thiagarajan told IANS.

"It's not a typical hero role and it has a negative side to it. If not Prashanth, we would go for an actor who wouldn't mind playing this different role," he added.

Prashanth, who is a popular Tamil star, is currently busy shooting for Telugu remake of "Julayia" titled "Saahasam".

Thiagarajan says he's yet to finalize the cast for the remake.

"The casting process will start soon. Our idea is to rope in a popular heroine to be part of all the four versions (Tamil, Telugu, Malayalam and Kannada) of the remake or choose two heroines to be part of two languages each. I don't have anyone in mind yet but we will finalize the female lead soon," he said.