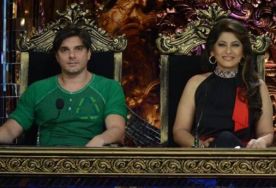 Tellybuzz had earlier reported about Sony TV's Comedy Circus - Ka Naya Daur which is made under the banner of Optymistix not eliminating its contestants for few weeks.

Our khabroo affirm this news and states, "There are very little chances for anyone to get out till December when Comedy Circus - Ka Naya Daur will see its finale. As currently there are only 5 pairs left in the competition, if they start eliminating the pairs there won't be any contestants left till the finale which takes place in December. Apparently it has been fixed that there won't be any eliminations in the show henceforth. It might take place only in the semi finals and the remaining will reach the finale and fight the battle."

We tried contacting Vipul Shah, Producer of Optymistix Production but all our efforts went in vain!

This will surely bring a smile on the contestants' faces so laugh out loud audience because the laughter machines are here to stay...

+ 5
9 years ago I dont know how this show is still surviving to be honest! I mean shows which a re popular are cut off with a lame reason that TRPs are low but what about this show?
In sony I like only KTLK, BALH and now Parvarish!

. i'll be able to see Shweta tiwari whole weeks on Sony till december..