Star Plus and Rajan Shahi's, Chand Chupa Badal Mein will see a major high point in tonight's episode wherein Nivedita (Neha Sargam) who has always been an underdog stands up for her own family and herself. 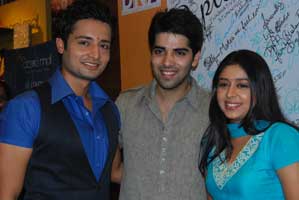 The recent family drama is creating a rift between Nivedita and Siddharth(Abhishek Tewari), and things reach a certain phase where Nivedita cannot control her emotions any further and bursts out at Siddharth.

Our source tells us, "There will be a big showdown between Nivedita and Siddharth which will end in the love birds breaking up. This will lead to a major face off between the two and this will enable Nivedita to emerge as a woman of substance. Also this will mark the entry of Kinshuk Mahajan into the show."

We hear that Kinshuk Mahajan is shooting for the promo today and will be starting shoot very soon.

When contacted producer Rajan Shahi said, "We have taken our time to bring about a transformation in Nivedita. The girl who was shown to be a meek character will now grow in strength and will stand for her dignity and self respect. Nivedita is not a girl with superficial beauty but is also a woman who is strong and beautiful from the core. This major face off between Nivedita and Siddharth will result in the much awaited entry of Kinshuk Mahajan."

Neha Sargam told tellybuzz, "Things reach a breaking point where Nivedita cannot control herself. She has been showing a generic growth in personality off late but when her love pains her and makes her angry she gathers all the courage to fight for herself and her family."

Catch the major confrontation between the protagonists in Chand Chupa Badal Mein tonight.

avleen2312 10 years ago I like this show very much...kinshuk's entry was nice, but I hope to see sid n nivi together again

television09 10 years ago guys i heard that kinshuk is entering in the show this week... is it ttrue