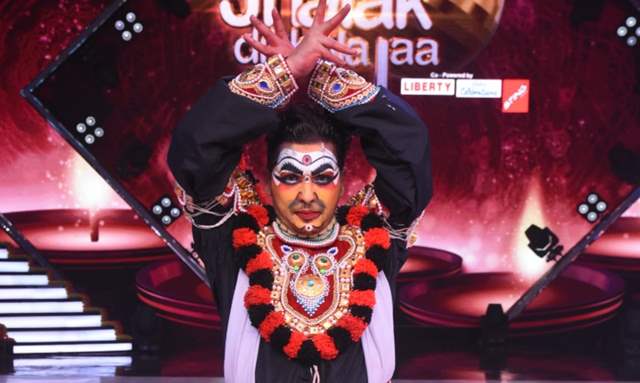 When it comes to pushing the envelope on dance and performances, COLORS’ ‘Jhalak Dikhhla Jaa’ has been setting the standard quite high. This weekend ‘Jhalak Dikhhla Jaa’ family gets into the spirit of festival showcasing performances around the various mythological treasure troves of India in the ‘Diwali special’ episode. From portraying the fight between ‘Rakhtbeej’ and ‘Maa Kali’ to showing the tussle between ‘Ganga’ and ‘Lord Shiva’, this week the contestants delve deep into the Indian culture and depict numerous epic tales through visually stunning acts. One such performance that leaves a strong impression on the minds of the judges and the audiences alike is of Nishant Bhat and his choreographer partner Anuradha. Nishant takes up the challenge of depicting the story of ‘Ravana’ and how his ego led to his destruction through the traditional Kannada dance form ‘Yakshagana’. Wearing a 30kilo outfit for his act Nishant creates history on the show and leaves everyone awestruck. He reveals that this is the first time that ‘Ravana’ is being depicted through ‘Yakshagana’ on the national television.

Nishant talks about the challenges and says, “I always believe in performing to the dance forms that have never been shown on television. I wanted to challenge myself and take up something that nobody has done before. This is the first time on Indian television that ‘Ravana’ has been depicted through ‘Yakshagana’. I wanted to take up this challenge as my choreographer Anuradha was also excited to do something new.”

The judges unanimously praised Nishant for his brave choice and complimented his choreographer Anuradha for beautifully visualising the whole act. Judge Karan Johar, impressed by the visual brilliance of the act, says, “The ten emotions of Ravana depicted through the led screens was extremely interesting.”

Madhuri Dixit also compliments Nishant saying, “You showed us something unique, something that we have not seen before on television. I understand your pain of wearing a 30kilo outfit and dancing. Years ago, I also  had to bear the same trouble while shooting for ‘Devdas’ and I know how difficult it is to dance in heavy outfits.”