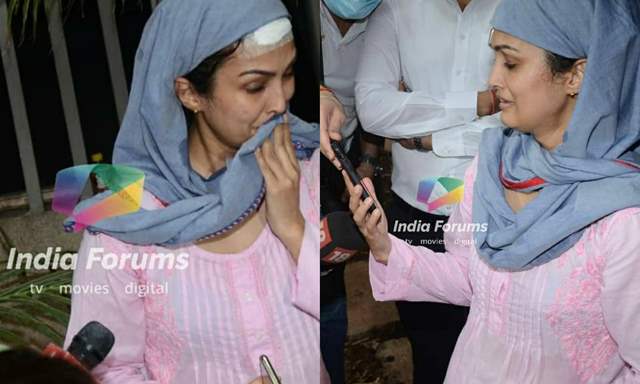 Nisha Rawal filed an FIR against her husband Karan Mehra at the Goregaon police station last night for alleged assault. While Karan told India Forums that she smashed her head against the wall and that she has a violent tone to her, he also claimed all the accusations of Nisha are untrue. However, Nisha has now spoken up about what went on last night and also revealed that Karan is having an affair and that she has been subjected to abuse over the years.

About what is going on...

Everyone was at home, my mother, Vicky, and my servant as well. Because it was night, Kavish was sleeping thankfully. Even after all of this, I was wondering what should I do, but then I dialled 100 and filed a complaint, and called my lawyer because I didn't know what to do.

I asked what do we have to do with our kids' future and he got really upset and wild. He is so smart that he never does anything where there are cameras but in our bedroom, where there is no camera, he only misbehaves there. We shut down the camera because we are also living here so I was not comfortable. We were in the room and I told him this is not happening, you have to do something because it is me and the child, and we as actors are inconsistent, and from what I read, he has said that I want the money, I am a fraud, and other things. He manipulated me into taking my jewellery. I gave it to him because he is my husband and he said that there is financial pressure and I said to sell the house, we'll move to a smaller house, I have always supported him. As he has told you that this is about alimony, I told him that we'll decide on a figure and I am not going to be unreasonable but we have to decide in a way that none of us are under pressure. Karan has been extremely bad when it comes to accepting like that. I told him that whenever we sell this house, we'll set apart some money for Kavish as well because he used his money as well, something I told him not to use because there is a line you need to draw. When I saw that he is not letting go and he is trying, I gave him everything and I did not bat an eyelid. We bought the home 7 years ago and the jewelry was sold in June 2020. Whatever loads, invoices, everything, Karan takes care of because he is the financial head. He has taken bills directly into his account, but I don't want to talk about it because it is never-ending.

Has he raised his hand on you earlier?

He has raised his hand on me earlier as well and as an actor, he understands cameras, so many times I have black and blue face and there have been instances where he has punched me.

Why have you been enduring all this, even after all this time?

Because I love him, I still love him, and I feel stupid and it came as a shock to me when he was having an affair. This is not easy for me, I am in the glamour world as well. I want to set an example for my child and he questions me as to why didn't I stand up for it. I don't want a father like Karan for my child, who is unethical. He lost his plot yesterday and I told him everything that I wanted and he got upset and he left. I thought he was going out and leaving but he held my head and he pushed me against the wall. This is the kind of person I am, I don't give up on people.

He said you are suffering from bipolarity and seeing a doctor. What do you have to say?

Nothing he says is shocking for me, but one is likely to behave the way he is behaving because someone who does not have any conscience, will never admit that he has done it. Bipolarity is a mood disorder, something that is caused because of trauma and is also sometimes genetic. I was diagnosed with bipolarity, it is not madness, it is a mood disorder and everyone knows how balanced I am. The first image was of 2014, we had lost our child, so when Karan's abusive behaviour continued, I clicked the photo to show it to my therapist because this was traumatic and Karan was detached, emotionally unavailable, hence I went to the doctor. Today, mental health is given so much importance, I was detected with a depressive phase of bipolarity and I took medicines and I was doing fine. My last medication was for anti-anxiety because obviously, this man was troubling me, and it was given to me on the 5th of August 2020. It was just for anti-anxiety and it was in a very mild dose.

Karan has been extremely ignorant, a woman needs therapy, she needs to talk to someone. For example, I got hurt because I hit my leg and I told Karan that I want to go to the doctor. One might ask me that you are a strong girl, why do you have to ask for permission, it is because he has total control. I lived in that fracture for 2 months.

Does Kavish know anything?

Kavish does not know anything because his father is not in the city, because he is in Chandigarh. He is also not attached. 14 days Karan was here and he knocked on his door for once barely, and they had 4 video calls. He is perfect, he is doing fine.

He has also spoken about the alimony amount.

He is lying, and if you want to do this, bring him in front of him and I will clarify things. I told him that I will help him because I know we are actors. When two people are together, it happens but when they fall apart, one has to give a commitment on paper because he has broken my trust.

TheLostWriter 3 months ago I dont believe this lady. Look her bad acting during the interview.