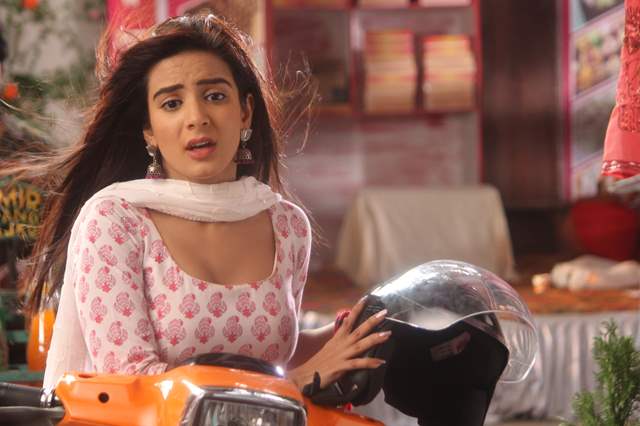 After presenting three interesting fiction properties in the festive month of October and captivating its audience, Zee TV decided to take its audience on a trip full of fantasy. The channel very recently launched the second season of its immensely successful and intriguing weekend thriller, Brahmarakshas. Produced by Balaji Telefilms, the show premiered its first episode on 22nd November, Sunday with television actress Nikki Sharma essaying the lead character of Kalindi opposite popular actor Pearl V. Puri playing the role of Angad.

With Kalindi marking Nikki’s first lead role in her first ever supernatural show the actress has been working extremely hard to step into the shoes of Kalindi, even if it means trying something new. For a recent scene where Kalindi accidentally bumps into Angad for the very first time in a market, Nikki was required to drive on a scooty. Having never rode a scooty before in her life, the experience was a rather exciting and cherishing one for her. Not only did she manage to learn but flawlessly enacted the scene too.

Sharing her experience, Nikki Sharma said, “I tried quite a few new things for the show Brahmarakshas 2, one of which was driving a scooty. Initially when the scene came to me, I told the makers y that I didn’t know how to ride a scooty and I wouldn’t be able to maintain my balance. However, they were persistent on having the scene done that way and so I decided to practice for nearly 5 days on set regularly, before we took our master shot. It seemed quite difficult in the first few days but by the fifth, I had a complete hang of it and managed to handle the vehicle quite well during the multiple takes we had. This was a new thing for me as I never rode a scooty before this and it was actually quite a fun experience.”

While several surprises await in Nikki’s life, there are no less that are set to arrive in Kalindi’s. Set against the backdrop of Ambala, Brahmarakshas 2 follows the journey of an ordinary young girl, Kalindi whose destiny gets entwined with the most ferocious evil force that has ever awakened. It turns out Kalindi was born under a peculiar birth star that makes her special and as a result, the Brahmarakshas needs her in order to accomplish his mission of attaining immortality. Kalindi’s only source of strength is her love for her partner, Angad. As she navigates and manoeuvres her way through the world of evil and her own ordinary life, Kalindi finds herself up for a gruelling battle to protect the people she truly cares for!