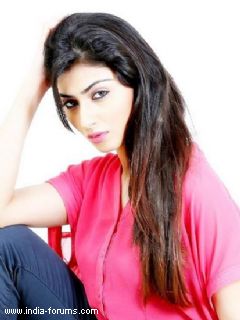 Pretty actress Nikita Sharma, who rose to fame after portraying the protagonist in Life OK's popular show Do Dil Ek Jaan, is soon to be seen in UTV Bindass' Halla Bol. The actress is enjoying playing her character in the episode.

We heard from our sources, "Nikita will be seen playing a small town girl who hails from Banaras. She doesn't have her father. She has her mother and sisters. She lives with her maternal uncle. Being a good classical dancer, she teaches dance to some children to earn. Her maternal uncle doesn't like the fact that she is dancing. Later, on being suggested by a relative, she is sent to Mumbai to become a star but unfortunately she ends up dancing in a bar. Now, the story will revolve around her as how she will fight back."

"The story has a strong message that a woman should fight back and take a stand against whatever is happening wrong with her. It was quite difficult for me to shoot in this scorching heat as we had to shoot in the real locations like Aksa beach and villages but I really enjoyed shooting for the show," concludes Nikita.

6 years ago waiting to see u in Halla Bol..
Luv u Nikita Sharma

6 years ago NIKITA SHARMA waiting to see you in Halla Bol. Luv u

ani13 6 years ago Waiting to see u in Halla Bol..
Missed u Nikita Sharma

6 years ago Thanks for the article IF! You gonna rock in Halla Bol Nikita Sharma! All the best!

Classic90 6 years ago Eagerly waiting to see u in Halla Bol...!
Love u Nikita Sharma...!

6 years ago NIKITA SHARMA waiting for your episode to air.love you so much dear

6 years ago All the very best NIKITA SHARMA waiting eagerly for ur episode,rock the screen again ! :)
Love Nikita Sharma

+ 2
6 years ago Amazing looks like our days are good we are getting to see our fav stars noe Nikita Sharma will rock it! Good luck!!! :)