View Profile
Newcomers Kunal Bhatia and Neha Saxena get a chance to perform dangerous things quite early in their career. They portray the characters of Amber and Dhaani respectively on Star Plus' Sajan Ghar Jana Hai. 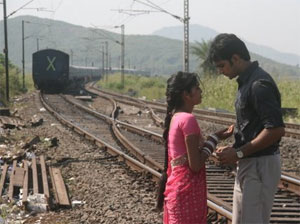 Featured Video
Says our source, "Newcomers Kunal Bhatia and Neha Saxena have been telling themselves only one thing lately, that acting is not at all easy. They have been disillusioned from the thought that acting is just a glamorous field."

When contacted, Neha Saxena aka Dhaani says, "It has been the most thrilling thing that I have ever done in my life. The sequence was such that I had to cross the railway tracks and Amber is running behind me to try and stop me. When I first heard the script I was pretty okay about it and to be honest, was really excited about it. But when we finally started to take the shot I got so scared that I started to get goose bumps."

Neha further adds, "Imagine you know that the train is about to pass any moment and the director orders to take another step towards the track and on top of it cross the track! All my excitement gave way to realization of reality and what I could do eventually was to take baby steps. My limbs were shivering, but somehow I did manage to complete the whole sequence and that too without any hapless incidents. I really got to say it's been the most thrilling moment of my life till now!"

Neha's partner in executing the scene Kunal Bhatia aka Amber says, "I think we did a great job as a team, it was a very important sequence and we had limited time to do it, we had taken necessary precautions and safety measures thus I was pretty comfortable about the whole scene but jokes apart when you have to cross the rail tracks and you see a train approaching in full speed, no matter how well coordinated the sequence may be, you tend to get your heart popped in your mouth. But I thoroughly enjoyed the shoot and more importantly it was well planned executed with all the necessary safety measures."

Seems like after Bollywood, actors in television too are performing their own stunts!

14 years ago thanx!
love the songs of this film especially aaja milke