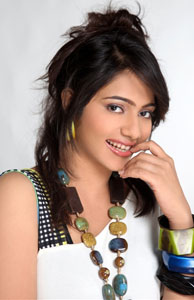 Neha Sharma swears by the fact that if it weren't for her co-star Smita Singh (who plays her onscreen sister Punpunwali in Colors' Sabki Jodi Wohi Banaata Bhagyavidhaata), she would've gotten easily lost among the chaos of lights, camera and action!

Neha talks to us about her first day of work in a daily soap. She says, "The first day that I worked, I had no clue about what was going on. I arrived thinking I've to give a look test because they had called me under that premise. I was one in two hundred and fifty people who had turned up. Everyone got tired of waiting and I guess when there were about eighty people left, I too ran out of my patience and got up to walk out. But at that moment someone stopped me saying that my turn was just about to arrive."

Later it was like Neha got pulled into a sort of whirlwind. "I went up to give my look test where they started experimenting with various costumes and hairstyles on me. And then at this one point when I was choked with make-up, the EP came up yelling to send me for the shot. I was baffled. I was like- wait I've to give an actual shot now?!"

Neha goes on, "The first day was an absolute disaster. I had to repeat every shot several times. My make-up was bad. And I couldn't get the accent right. Then I met Smita ji who looks stern from the outside but is a gem of a person from the inside. She started helping me with the Bhojpuri accent. She toned down my make-up a bit and also helped with my costumes. I can say that Smita ji is my mentor."

There's one other person Neha is thankful for. "Raakesh Paswan, the writer of Bhagyavidhaata also helped me a lot when it came to understanding the nature of my character and the script. I'm thankful for having met such wonderful people on my first show," she signs off.

We hope Neha goes a long way from here…

+ 2
12 years ago OMG is that really her??
Yea she is pretty, why didn't they take her like this..so there would be actually some competition between her and Bindya!!LOL

+ 4
12 years ago Holy cow! She's actually suprisingly gorgeous! Cant u make her like this on the show?

+ 5
12 years ago Thanks :)
Doing FAB JOB all the best for future! If this is your first show then trust me you've great future ahead!
Cheers and All the Best!

+ 5
12 years ago Is that Chuttu ??
She looks so different, even though i can't stand her character, she's doing a good job

12 years ago OMG , can't believe it's the same chuttu we know , she looks very pretty here

12 years ago she looks quite pretty... we can imagine hair style and dress changes a person's appearance...

she doing great job as chuttu...

+ 3
12 years ago wow neha is such a sweet prsn and yeah she looks so differentfrom her reel life avatar.lolz.good to know she has a wonderful rapport wth her co-actor smita,thanks for the interview, she is doing a wonderful job as chuttu, ppl actually get irked by chuttu's actions and that only proves her caliber as an actor, wish her all the success :)