Quite literally!! During the shooting of her latest movie 'Maharathi', Neha Dhupia was very apprehensive about one intense sequence with her co-star Naseeruddin Shah.

During one of the scenes in the film Neha had to scream and literally rave and rant at Naseeruddin Shah. The pretty actress found it extremely difficult to shoot the sequence because she was extremely nervous about showing such wild outrage in front of such a senior actor... 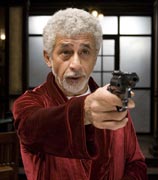 The moment the director said 'cut', Naseeruddin Shah used to be back in his element with a smile on his face while on the other hand Neha used to be mortified about her onscreen behavior!!

When we asked Neha she said," I have immense respect for Naseerji and screaming at him was extremely difficult."


Well, Neha these are the rules of the game!!!