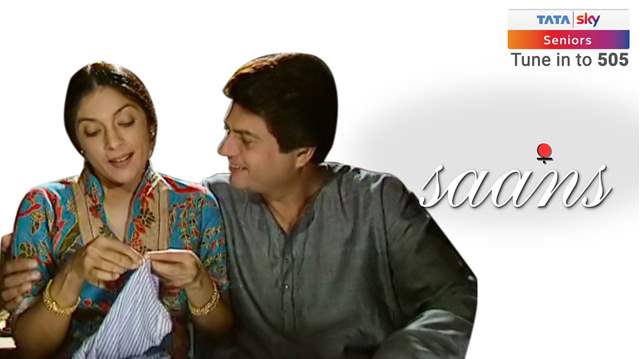 A modern take on adultery, relationships and broken marriages, the iconic show Saans was a breath of fresh air for the television audiences in the 90s. Bringing back those memories, Tata Sky Seniors is airing the cult 1998 show which was written and directed by National Award Winning actress Neena Gupta. She also played the role of female protagonist alongside actor Kanwaljit Singh, Kavita Kapoor, Shagufta Ali, Sushmita Daan, and Bharat Kapoor, amongst others. The show is on-air on Tata Sky Seniors – Tune in 505 every Monday to Friday at 12 noon and 9 pm.

The show was ahead of its time and challenged the image of an Indian woman as it tried to analyse the antics of the institution of marriage, cheating, and falling in love. It revolved around the happily married Priya Kapoor (Neena Gupta) and Gautam Kapoor (Kanwaljit Singh) and their teenage kids Akul and Mithi. However, things change when Gautam befriends Manisha (Kavita Kapoor), who later falls for him. He leaves Priya, only to find Manisha is tough to handle. Priya struggles to find her identity and stands up for herself eventually.

Neena Gupta took to social media to express her excitement and asked her fans to revisit and enjoy the old memories. In a video posted on Instagram, she said, “Everyone can now watch my show ‘Saans’ on Tata Sky from Monday- Friday at 9.00pm. Those who have watched it before, can watch it again and those who didn’t get a chance to watch it, can start watching it now.”

Payal Ghosh To File Official Complaint Against Anurag ...
28 minutes ago