Nazneen Patel, who was last seen in Sahara Ones serial Main Aise Kyun Hoon essaying the role of a journalist, will soon be seen in the coming episodes of Sony and Fireworks productions' Aahat. 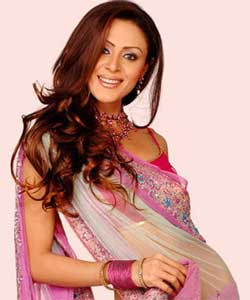 When contacted Nazneen Patel she conformed saying, "Yes I have just finished the shoot for the episode last night. I'm essaying the character of Sagarika a gym instructor and it was a thrilling experience."
Nazneen after an initiated break and turning down many of the projects due to conceptual displeasure finally seems to have found the right thing to do. "I had been withdrawing many of the projects since a year in a search for something different and when was offered one by Fireworks I accepted it without hesitation and resumed shoot the very next day", exclaimed Nazneen.
The talented actress who is regarded as a perfect combination of beauty and talent has been quite upset with the serial trends persisting in the industry at present and is eagerly waiting to enact a non-conventional and challenging role in near future; has sort out a way to bring back the old intellectual script writing back by working on one herself.
"I feel these days channel selects a person for the lead role considering their face value and not acting skills and I believe that a good script can make even an ordinary person a good actor. And with an idea to create an intellectual script I have written down a script myself without any negativity, though not completed yet I'm very much clear about the flow", informed Nazneen.
When inquired about the status of the script she said, "As of now I have written a script for about 25 episodes and as I'm clear with the concept writing ahead won't be an issue."


The episode starring Nazneen will be telecasted next week on 28th May.

10 years ago
It's good to see her back on television after such a long time.