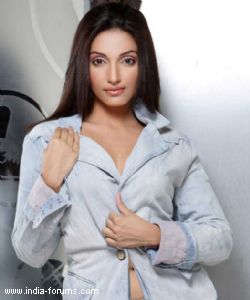 After featuring as the stylish girl of today, Diya in Miley Jab Hum Tum, Navina Bole will be next seen in Zee TV's historical show Shobha Somnath Ki.

A source says, "Navina will be essaying the character called Kausar Jahan who has a grey shade. She is alluring and manipulative in her intentions."

We contacted Navina Bole and she confirmed saying, "Yes I have started shooting for Shobha Somnath Ki.  I am really enjoying myself as we are shooting in a beautiful Mahal and it feels great to be playing a role from a time period when we didn't exist."

Navina's entry sequence is shot in water and will be aired in tonight's episode.

For the uninitiated, Shobha Somnath Ki which was earlier produced by Indra Media is now being produced by Swastik Pictures, whose Phulwa is presently on Colors.

+ 3
9 years ago All the Best Navina but it would have been better if u could get a positive role! Want to see u as Lead in a Good Show after this! Loved u in MJHT!

9 years ago Best of Luck for the new show

+ 3
9 years ago I wished her character would have been positive...

9 years ago
nice to know! I loved her in MJHT my fav character. I wish her all the best

upensr 9 years ago never watched this show but I don't like It's name...
"Shobha" "Somnath" ki
Shobha was my classmate in college, and I used to like her.

9 years ago another negative character after indumati