Natasha Sharma played the rebel Sia to perfection in COLORS' Na Aana Is Desh Laado. The generation leap has now forced the actress to quit the show, and the episode to be aired on Thursday will see Sia's death. 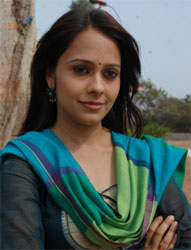 As we know, Raghav (Aditya Redij) has left his family and is searching for Sia who is somewhere in the hiding along with Amba (Shikha Singh).

Media reports have clearly stated that Sia would meet with her end after delivering her twin daughters.

Our source states, "Sia will indeed die after labour, and before she breathes her last there will be a very emotional sequence between Raghav and Sia. Raghav will be left alone to take care of his kids and this will be a sad moment for him".

We hear that soon after Sia's death, Raghav will also die. He will probably die after getting caught in fire. However, this aspect of the story is still being worked out.

Natasha Sharma told TellyBuzz, "Yes, I have already shot for my death sequence. It was a really emotional parting as I have been there in the show from day one. I had to get out of the show as I was in no way playing the older woman. It will be tough on the viewers now, as their loved jodi will not be seen anymore. On this note, I would like to wish the new cast who will be coming in; it is a big challenge for them as well as the viewers. Having said this, I promise my fans that Natasha will be back very soon in a new avatar. There is a lot more to do".

Talking about her plans, Natasha said, "I will be wrapping up my shoot for Laado on 16th. After that, I will fly to Delhi to be with my family for few days. It will be a family affair for a while".

Catch the gripping sequence where Sia breathes her last this Thursday…

br200910 8 years ago Aditya...Bright colors, water balloons, lavish gujiyas and melodious songs are the ingredients of perfect Holi. Wish you a very happy and wonderful Holi.Lots of Love... Barenya...

mmayaa 8 years ago we miss u a lots pls cm back as soon as possible...luv u:)

poetic 9 years ago Am so sad to see you go.

Looking forward to see you back soon

bittu31 9 years ago It was so painful to watch u going ..
Will miss u come back soon ..

sai2311 9 years ago Thanks for entertaining us. Wish u all the best for future

das_mits 9 years ago You were the only sweet looking person in Ladoo. Without u i dont wish 2 watch Ladoo from now.

poetic 9 years ago @ Sai - you are so right. They just became parts of our lives.
And it's heartbreaking to see RaSia like this.

sai2311 9 years ago Natasha & Aditya were the people who lured us into watching the serial.Never realised how & when they became a part of our lives. we all are going to miss them