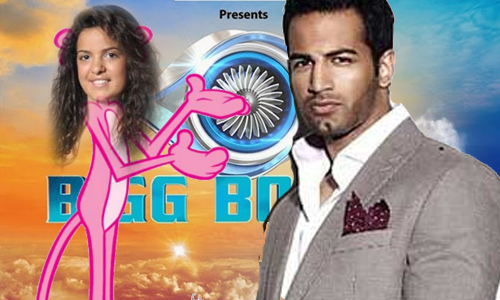 It is just 3 days that the next installment of Bigg Boss airing on Colors has started and the show has already created a lot of stir amid the audience. TellyBuzz has been constantly reporting about every update regarding the inmates, their tasks and nomination details too.

We have already seen Upen Patel flirting with Sukirti Kandpal and giving her nick names. But post the tiff between the duos looks like Upen has shifted his focus.

Upen had already position Natasa Stankovic on number one during the task given by the Secret Society. But lately what next we have heard is, in a very tender conversation between Upen and Natasa, he was seen admiring her and praising her beauty. Upen learnt about Natasa's obsession for pink and thus he came up with a new nick name for her - Pink Panther. Upen was floored by her giggle.

The show also showcased in yesterday's episode some brewing romance between Gautam Gulati and Diandra Soares.

Well, this shift from Sukirti to Natasa is Upen Patel's strategy to last longer in the game? Only time can tell because you just cannot predict what will happen next in the Bigg Boss 8 house.

home-alone 6 years ago Difficulties do not come 2 destroy U, bt 2 help U realize ur hidden power Gd Look Sukirti Kandpal

6 years ago Luck is like sand in hands.
It'll sneak out through the fingers,
no matter gripped firmly or held loosely.
Only hand in the praying posture can save it!
Wish you good Luck.
Sukirti Kandpal

LovelySobia 6 years ago Luk backward with satisfaction
& look forward with confidence,
u'll succeed in ur life.
B bold when u lose,be calm when u win.Best of luck!!!Sukirti Kandpal

6 years ago "Challenges are what make life interesting and overcoming them is what makes life meaningful."
Sukirti Kandpal love you