Mikaal Zulfikar, who is a Pakistani as well as a British national, is all set to play a major role in Jag Mundhra's (‘Provoked’) 'Shoot on Sight'. The film also has brilliant actors like Nasseruddin Shah, Om Puri and Gulshan Grover among others. The film is based on 7/11 bombings in London. Mikaal has been acting in serials in Pakistan and was active internationally as a model before taking a plunge into acting. Thought this movie would be his first film release, he has earlier done a crossover Indo-Pak film 'God Father', which has not been released yet. Let’s hear what he has to say about himself, the director, co-actors and many other things.

Q. To start with, you have quite an unusual name! what does your name 'Mikaal' mean?
A. My full name is Mia Mikaal Zulfikar and the meaning of Mikaal is ‘responsible for causing rain’. The main story behind my name is that my father wanted to call me Mikaeel and my mother being British wanted to call me Micheal. So, they decided on the mixture of both the names Mikaal.

Q. Ok, now about the movie. How was it working with Jag Mundhra?
A. Jag ji is not just a director to me, but also a father figure. First of all, I would like to say that I am thankful to him that he believed in a newcomer like me and gave me a chance to do an important role in his film and show my work to the audience. About the film, I would like to say that he chose such a difficult topic, but the way he has executed it is not enough for any praise. When the audience will see the film, they will realize how beautifully Jag Mundhra has dealt with the topic of terrorism.

Q. Ok, so the film deals with the subject of terrorism?
A. Basically, it is hard to say what basically the subject is (laughs). The subject deals with the post 7/11 bombings when every Muslim was being termed as a terrorist. The film talks about the labeling of Muslims as terrorists. It has a western opinion, eastern opinion, moderate Muslim opinion and fundamentalist Muslim opinion. All these things have been woven in the movie regarding the 7/11 bombings.

Q. You have been living in London yourself, so did you relate to the character you portrayed?
A. Actually, I am born in England and I am a British national from my mother’s side. So, as such I didn't have to face anything like that, but I know many of my friends who had to face racism slurs in a way. So, I do relate to racism. At the same time, I did a lot of research for the role as the role was very tough and challenging. I don't think many up-coming artists will like to do this type of role as it is very demanding. These days whoever comes to become an actor wants that he should look like ‘hero’ and he has action sequences, nice romantic songs etc. All I would say is that this has been a very challenging role for me and I am very happy with whatever opportunity I had while performing the role. 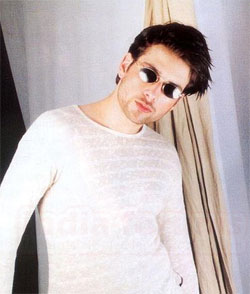 Q. Have you done any film before in Pakistan?
A. No, I have not done any films in Pakistan, but done a film called 'God Father', which is a co-production between India and Pakistan and the director is Hriday Shetty. It should be released soon in India. The film has Vinod Khanna, Nafisa Ali, Arbaaz Khan, Hrishita Bhatt etc. Preeti Jhangiani is opposite me in this film. From Pakistan, there is Meera and myself and few more actors. It was the first film which I signed, but its not going to be my first release. I had a negative role in that movie also and I hope when the film is released here, I will get good response. These are the only two movie projects I have done so far, but I have done more than 20-25 television serials. Before that, I was a model and I have done 30-40 commercial campaigns. I received the ‘Best Model’ award in Pakistan, but now I want to branch out and when I see my career as an actor, I see it in films. And when I have a chance to work in the Indian film industry, then I will prefer that I am accepted by Bollywood and I get a fair number of roles.

Q. Who is opposite you in this film as a heroine?
A. India Wadsworth is opposite me in this film. She is also doing her first film and she is a British. This film is based in England and has a mixed cast of English and eastern actors. But since the film is a political drama, the love between them is not the base of the film. My major work is with Naseer Ji and I have heard that he is considered to be one of the best actors of India and working with him was a wonderful experience. Also, I had the opportunity of working with Om Puri and they have been so supportive and caring that I felt at home working with them. They were so genuine in their advice and it will show in my performance too. According to me, this is going to be one of my best performances.

Q. What suggestions did they give you to enhance your performance?
A. Actually, whenever I got any scene, I used to run to both of them and ask for guidance and they guided me very well. While shooting, Naseeji and I bonded very well and now I am like his son today. And acting is all based on action and reaction and according to me when you are getting such good reactions, you have to act nicely. You have no excuse.

Q. Any actor whom you have considered as your idol?
A. After working with Naseerji, I will say it is him.

Q. But this is after you worked with him! Whom did you idolize before you actually met Naseeruddin Shah?
A. I have always liked Naseerji's work and I admire Amitabh Bachchan also as he has done some very powerful roles lately. And for today's generation there is no answer to Aamir Khan.

Q. Was acting your childhood dream?
A. My childhood dream was music and I dreamt of becoming a Ricky Martin or an Enrique Iglesias. Today also, I have a dream of becoming a singer as for now I have become an actor, but I have plans of bringing out an album once I get recognition as an actor.

Q. How was Arun Govil as a producer?
A. I think he has done a commendable job choosing to produce this film as it is such a serious film. Otherwise he could have made a slapstick comedy or a very commercial movie and made tons of rupees, but he chose a subject which had truth and message in it.

Q. Do you have any preference that you will do films of a particular genre only or would you be open to other commercial subjects as well?
A. I feel I am an actor and a versatile actor will do any kind of films. So I will do any role that comes to me provided I like it and find that I will be able to pull through it. I will do any role with full devotion whether it is romantic or action or comedy film.

Q. How choosy are you while accepting roles?
A. No, actually I love doing comedy and I feel I am a good comedian. As an actor all roles are equal and I respect all genres of films. So there is no question of being choosy. But yes, the role should have something for me to do.

Q. Have you done any acting workshop before starting your acting career?
A. No, I have not done anything like that. Whatever I have learnt is on the job. You learn everyday while working. I think nobody can say that he knows acting fully. It is a very intelligent job.

Q. You mean to say that acting cant be learnt?
A. No and yes both. Actually it is a very tough task and there is no short cut here. If Amit ji and Naseer ji are such brilliant actors then their 30-40 years of experience in the field is the reason. I think there are no shortcuts to experience in acting. I could be wrong as I never went to any acting school, but I think that there is nothing compared experience and what you learn on the job.

I have a lot of expectations from this film. I had a great opportunity working as an actor in this film and I really hope I am liked by Bollywood and have some kind of future here. - Sonu Anand - (SAMPURN)