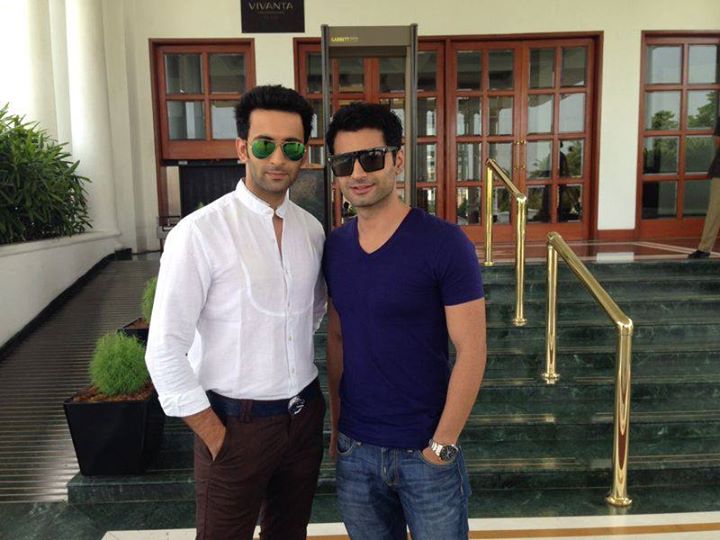 After charming the viewers with his handsome looks in daily shows Uttaran and Phir Subah Hogi, TV actor Nandish Sandhu who is back to spell his magic on the small screen with the show of Colors' Beintehaa is seen sharing screen space with Harshad Arora and Preetika Rao.

Fortune Productions' popular show Beintehaa on Colors is gearing up with some high voltage drama as well as some happy moments. The ongoing tracks of the show will soon get to see some heartbreaking moment between Aaliya and Zain.

While these actors tend to shoot continuously so they need some leisure time to relax and relieve themselves. So in between the break many actors are seen relaxing, chit chatting about their varied interests. Out of which Nandish and Harshad were also seen talking about gadgets and games. The two not only share a good equation on-screen but also share a great bond off screen.

It seems that the actors enjoy chatting about gaming, various apps and advanced technology.

TellyBuzz contacted both the actors to know about their onset fun and here is what they have to say...

Nandish Sandhu who is seen as Rehaan in the show says, "Basically I have just started shooting for the show so we didn't get much time to get along but whenever we get free time on the set we sit and chit chat a lot about gaming and new gadgets, new phones coming in the market about their applications and other stuff. I did not get much time on the set for having fun. We click pictures and even order food from outside then enjoy having it together."

Nandish went on to share his happiness on the social networking site too, "Beintehaa gave me a frnd with whom i can always discuss gaming n gadgets in between shots.. Harshad, I and #PS3 makes anytime a #funtime.."

Harshad Arora who is loved as Zain in the show says, "Yes, I and Nandish have a great fun on the sets. I have an i Pad, we keep discussing about games and new gadgets coming in the market."

Indeed a nice to hear that Harshad and Nandish!

thamrana 6 years ago Harshad and Preetika rock in Beintehaa. Thier chemistry is just amazing.

soniadutta 6 years ago Harshad Arora doing best as Zain...love him

sunshine_love 6 years ago Love Beintehaa so much harshad and preetika are rockin !!

-farzana 6 years ago Harshad Arora and Preetika Rao are the best! Love Beintehaa

Michmichi 6 years ago Harshad Arora and Preetika Rao are the heart and soul of this awesome show Beintehaa!