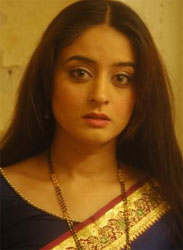 Nakusha (Mahhi Vij) in COLORS' Laagi Tujhse Lagan has been having a tough time ever since she got married to Dutta (Mishal Raheja). Now that she has returned from the hospital, she has to go thro' one more ordeal which puts her in bad light before her husband.

Our source says, "The family organizes a post-marriage party for Dutta and Nakusha. Kalavathi (Aashka Goradia) as always comes up with a plan and spikes Nakku's drink. Nakku behaves oddly and before everyone present, she asks Dutta to acknowledge her love. She even pesters him to say 'I love you'. If this is not enough, she opens up saying that she has always tried to do everything for him, but he has never responded in the way a husband should. After saying this, Nakku passes out and Dutta drags her to the room. Once Nakku gains her consciousness, Dutta slaps her hard and asks her to understand what she is talking".

While Kala enjoys this entire drama, it is Nakusha who has now been pushed to a corner once again..

We tried calling Mahhi, but she remained unavailable…

Ani_La_Iam 9 years ago MIshal R. we will be looking forward to see what you are going to do next…please do not keep us waiting for to long.

LadyMacbeth 9 years ago All the best Mishal n Mahi, u two rock as Dutta n Nakusa.

ChurailMukhi 9 years ago Srividya Rajesh= wrong information! LOL! This did not happen! Dutta slapped her in front of everyone, not in their room!

Yuvika_15 9 years ago Mishal and Mahi rock as Dutta and Nakusha.
hope 2 c mre romantic scenes between them soon...

Yuvika_15 9 years ago Mishal and Mahi rock as Dutta and Nakusha.
hope 2 c mre romantic scenes between them soon... sad 2 c thm in so much pain..they need one another

Yuvika_15 9 years ago thanks for the article..bt wt it suggests isnt quite wt happened..lol
naku made sure kala's plan backfires... he did slap her tho n bechara was so hurt 2 c her arm bleed,...n thn punished himself for slapping her..
the kitchen scene between tasha was so adorable n emotional! love dutta wen he is drunk... he is so loving n caring towards naku

rama_2010 9 years ago Anxiously waiting for next week. LTL rocks.