Nach Baliye is not only fun but also taxing for the participating couples. Take Jodi No 11, Daljeet Kaur and Shaleen Bhanot. The duo is putting a lot of effort to get their moves right. The couple speaks to Telly Buzz about participating in Star Plus' Nach Baliye 4 and their relationship. 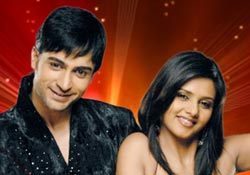 Talking about rehearsals, Daljeet says, "It is becoming hectic day by day. We shoot for our respective serials during the day and rehearse for Nach in the nights." Shaleen adds, "We haven't slept properly in many days. It's taking a toll on our health."

Shaleen, who recently underwent a knee surgery says, "I was recently operated as I had a torn ligament in my knee. Doctors have advised me not to exert myself too much. But I am a very impatient person." The risk taker that he is, adds, "I have one of the best doctors to take care of me, so why shouldn't I take a bit of a risk and do something different??"

Daljeet has her own health issues as she says, "I get very tired after a hard day's shoot and haven't been sleeping properly in the last couple of weeks. We are both trying to maintain our health but it doesn't seem to be working out. Both of us try and take catnaps in between the shoots."

But if it is such an ordeal, why are they participating in Nach? "Nach is like a journey for us. I told Daljeet that it does not matter even if we don't win; we are here to enjoy ourselves. It is going to be a great experience for us", quips Shaleen.

"We sit with our choreographer and discuss the steps. I have a broken wrist, bad back and an operated knee, so I cannot do lifts, jumps, bending or rolling.  It is a huge problem for our choreographer to match up with our demands", says a laughing Shaleen. The duo rehearses for 5 to 6 hours daily. "Normally we try and make it to rehearsals together. After we finish shooting for our shows, we call each other and drop in at the rehearsal hall at the same time", he adds.

Coming to the personal front, how did the couple meet? "I met Shaleen on the sets of Kulvaddhu. Neither of us proposed formally; we just liked each other's company and it went ahead from there" quips Daljeet.

Not many people know that Shaleen and Daljeet share the same date of birth too. "He is just two hours elder to me. He has very simple habits. We have so many habits in common and the best part is that our thinking level is also very similar" quips Daljeet. But too many similarities have an adverse effect too. "Whenever I think of giving him a surprise, he surprises me with the same thing. For instance, I bought movie tickets and decided to surprise him with them. But before I could do anything, he surprised me with tickets for the same movie. He does whatever I am thinking of doing even before I utter a word", adds the actress.

With both shooting for two different shows, how do they manage to spend quality time together? "We call and message each other practically every day. We always try and make it a point to meet up after the shoot and spend as much free time together as possible", concludes the duo.

They surely do make a cute pair and we wish them luck in their journey of Nach Baliye 4. Hope they not only win the hearts of the judges but the janta as well.

*shilpa*karan* 11 years ago Luv their jodi, such great actors as well. Hope they make it far, people do vote for them because the other jodis are more popular and will get more votes. All The Best ....

r07c 12 years ago Luv their jodi, such great actors as well. Hope they make it far, people do vote for them because the other jodis are more popular and will get more votes. It was reported long time ago that someone on the Kulvudhhu set was sending Daljit roses and gifts signed with a letter S. So, I'm happy its Shaleen cuz they suit eachother. I luv how they have so many similarites and hope they stay together. Huge fan of them

miggie 12 years ago they make a cute couple, good luck to them

pinky_blueskies 12 years ago aww.. shaleen and daljit.. i love you after DMG and CHA!! :) wish you both all the best!

Jenifer. 12 years ago awwwwwwwww....that's so cute! they think exactly the same! all the best to them!