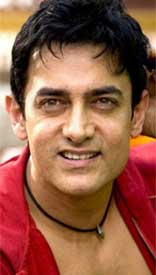 Aamir 'perfection' Khan is soon to find a new middle name, that of a super hero! American producer Uru Patel has hailed his Indian roots and deciding to create a never seen before superhero character, an inspiration from 'Hanuman'. The revered monkey faced devout of Lord Rama in the Hindu mythology of Ramayana. And Aamir Khan is said to have been approached for the role. Diversity having been one among his leading mottoes, Aamir has shown interest, although a final word of consent will come from him only after he approves of the script as a whole. The movie is finalized to be directed by Chuck Russel. News has it also, that Hollywood sensations Keanu Reeves and Gary Oldman have been signed already to play the roles of Ram and Raavan respectively. The movie makers had aspired to cast Shilpa Shetty as the lead lady in the role of Sita. However, the actress, having stepped out of the project has left an empty spot behind herself for the same. Here perhaps, since no news of any suggested names for this role have been heard of yet, the faithful movie goers will have their opinions to offer!. The project, even in nascent stage of finalization is an apparent international banner to be. And with Aamir's avowed tradition of seeking perfection, we can be near certain the world will, depending upon his 'yes', soon see another immortal super hero rise to life! Here's wishing the project all the best!
Featured Video