Rajan Shahi's Director's Kut, the independent production house based in Mumbai aims at making meaningful TV serials and to get the best on our television screens. With three successful shows on air in Sapna Babul Ka.. Bidaai, Yeh Rishta Kya Kehlata Hai (both on Star Plus) and Maat Pitaah Ke Charnon Mein Swarg on COLORS, and with three solid years of experience behind them, the production house is now going in for a major revamp in terms of collaboration. 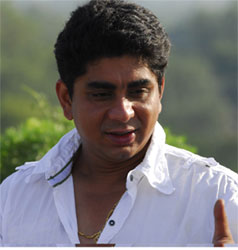 Featured Video
Says the pioneer Rajan Shahi, "DKP has three ongoing shows, which are very distinct in flavor and texture. We have made a mark for ourselves in a short span of three years. I am personally proud of my three shows, not only because of its content, but also because of its presentation and high production values. We have a very nice focused team for these shows and this really shows in way of results".

With the foundation laid for a great run in the television scenario, Rajan Shahi's impetus is now in sustaining and consolidating the positions that Bidaai, Yeh Rishta and Swarg have gotten for themselves. "The focus will now be on overhauling the entire system mainly in terms of creative ideologies. Initially, I was bit reluctant in expanding my creative team; but now I am opening the doors and inviting more creative people to join us. I am now personally involved in meeting and connecting with lot of Creative Directors and Writers, who have a vision of their own, who can develop, plan and add their own creative ideas, and take our company ahead from the point we are now. Basically, I am looking at a major expansion and a new way of functioning".

Elaborating more on the experienced Creative minds that he is looking for, Rajan states, "I want a dedicated bunch of creative directors and writers, who have the fire and spark in them to run the race like we have done for the past three years. We have a core team which is connected from the grass root level, which has a minute to minute involvement with the projects. I do not believe in a hierarchical way of functioning; we have a personal touch in whatever we do, and have mutual respect towards each other. Hence, I am on the lookout for creative minds who are passionate, have a creative vision; who are ready to toil hard for results and get involved into even the minute of details to make the final product appealing to masses".

"The new talent coming in should also recognize that there is a Producer who can give them the right platform and project in getting their vision forward, and should be able to grace themselves for the next phase ahead", adds the Producer.

At this juncture, Rajan Shahi makes it clear that he will be selective in getting the new talent in, as it going to be their innovations that will eventually take them forward in the long run.  "In other words, we want people who are not of the typical switch-on-switch-off way of functioning", he verbalizes.

Ask him whether this expansion in terms of creative ideologies also means that he will be coming up with more ventures on television, and the man is quick to say, "Yes, we will be working on something more in the coming future. Though it is too early to talk about it, I can only say that we are surely gracing up to do something interesting".

Quiz him more on whether the buzz of Director's Kut coming up with a reality sooner or later is true, and he states, "Why not? There could be a possibility of going beyond fiction. However, I would emphasize on the fact that all depends on the creative minds who join me. It is not about what Rajan Shahi wants in the Company, but it is all about what the Creative Directors and Writers coming in want. My job is to follow their vision and provide infrastructure".

Last but not the least, Rajan is all praise for his creative team that has put in all the hard work in making his three ongoing shows a success story. "I have high regard for my present team and they are a very knowledgeable bunch. But now, the time is ripe for an expansion of sorts in terms of creative ideologies, and we are gearing up for that".

+ 2
13 years ago I really LOVED Bidaai and YRKKH your creative team messed up Bidaai (final straw being CM being the culprit). Though I love YRKKH in parts, I am getting sick of Naitik's tantrums and childishness and illogical ways to create obsticals (like Gulabo's lies). I'd love to see you save both shows but doubt it if Bidaai can be saved

13 years ago rajanji, i request you please fire your creative team,and hire new because they are spoliling your show...and i suggest you one thing watch your shows again as a viewer then you will find how many mistakes are there and they are showing a crap, they destroy a lovely story a lovely character of rajvansh house.........please review you shows n make choti ma as it was before......nobodywant to see her negative. Give a new turn to your show , the current track is very old.....

13 years ago i love YRKKH,,,my frends say it is a slow serial but i infact love the minute details of everyday life they are showing.

13 years ago I like all 3 shows. I so hope they stay for a long time and that RS will be in the industry for a long time and that he will contiue bringing us such morally sound shows. As for all those RS haters, you are intitled to your opinons but seriously if the shows weren't that good why do they have such high TRPs and can maintain them. Just for the record KDHMD like all other EK shows has lower trps because they are predictble she uses the same old tracks over and over again and drags the story too much. I am sorry but in truth todays audiance is no longer captivated by the tracks that had made KSBKBT originally famous. RS is a fresh new director who has brought morals and traditon back to television and has shown it in a very interesting way. Oh and there are alot of non-EK shows on Star Plus that are much better then KDHMD, other then Bidaai and Yeh Rishta, there is also Baa Baho aur Baby which is 5+ years and going strong and Sabki Ladli, and RKAB. Plus MJHT is an awsome show as is DMG, HDHAA, Bahgyavidhaat, and so many other's.

+ 2
13 years ago good news. at last ... you should have done this much before, flopping the standard of Bidaai was really sad.. remove those creatives...

+ 5
13 years ago Wish him all the best for his future Projects and also hopefully with the revamp of Bidaai, It gets it's charm back !