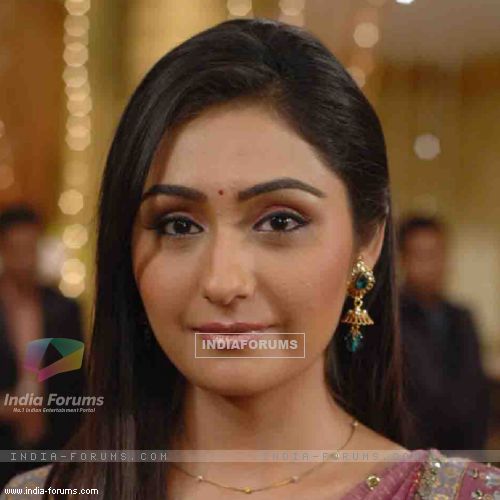 Namrata feels happy to be a part of this show which she has always wanted to work with Rashmi Sharma. TellyBuzz spoke to Namrata to know more about her character in the show, how has life changed after her marriage and much more.

Talking about her character, she said, "I am playing the role of an elder daughter in law of the house. In the show, it has been shown that I had an arranged marriage and my  love story will happen post our marriage. She is very sweet and obedient, she is a good wife, a good mother to her daughter and she is also a good sister in law. She takes care of her brother in law Abhimanyu (Kinshuk Mahajan) and knows all the secrets of him. Her tuning with her brother in law has been shown very well in the show. She follows all the rituals of the family and obeys her mother in law.

She is a well educated girl. She takes care of her husband and her daughter. There is a twist in her character further as she will realize that though she is well educated but she couldn't do something in life. Her priority is family over her career. She will realize this after Riya will enter the house and her husband will allow her to work while she wasn't allowed to work after marriage. So, now the viewers will have to see whether she will raise her voice for this or Riya or her husband Sarthak will raise their or she will take everything lightly."

We have seen Namrata decked up in pretty sarees and traditional Rajasthani attire in the show. We asked Namrata about her looks and she told us, "I like my look in the show as I am wearing pretty sarees in the show. Everybody knows that Rashmiji takes a very good care of the costumes, jeweleries, etc. of all the artists of her shows. Everybody has got nice costumes to wear. Seeing my saarees, people say that I have been given better sarees than the lead. I am very happy that I got a chance to work with one of the leading producers. She knows the pulse of the audience and knows how to run a show balancing positivity and negativity in the storyline. For a long time, I wanted to work with her. This time, I am very lucky to work with her. All her shows are quite popular and I hope that this show will get the same popularity among the audience too."

Namrata has been paired opposite Ankur Ghai who has made his debut in the field of acting through this show. When asked about the off-screen bonding and working with Ankur, Namrata shares, "We share a very good bonding off-screen. I didn't know that he is a good actor. After Nach Baliye season 6, its his first show as an actor so we were thinking whether it will work out or not but then he has picked up with a great pace and everyday he is polishing his skills as an actor. He has a great sense of humor and because of his good sense of humor, our scenes too come out good and we share a good tuning. He is very supportive and understanding as well and his hard work is being paid off. He is acting really well. I hope that the audience will accept us on-screen."

Tum Aise Hin Rehna revolves around the concept that guys change after marriage. Namrata has recently got married too. So, we asked her about her opinion about this and she quipped, "I feel that they do change a bit (laughs). Sometimes it happens that even if the husbands don't change, then the wives think that they have changed. In my real life, my husband tells me to come along with him on a bike and not in a car. He wants to me sit behind with him as a girlfriend and go for a long drive once in a month. I really love this about him. He also knows that I love to have ice-creams and he takes me to have an ice-cream. It is really sweet and nice to see how he takes care of every little things about me. He really treats me like a princess. I pray to God that I will always be his princess."

Namrata's on-screen chemistry with Sameer Dharmadhikari in her previous show Yahan Main Ghar Ghar Kheli proved out to be magical and fans still want to see them together back on-screen again. When asked Namrata about it, she said, "Its my and Sameer's wish too that we will come back together again on-screen. The kind of chemistry and bonding we shared on-screen as husband and wife, happens rarely. We were waiting that if we will get some better project then we will make a comeback. In future, if something good will come then I would love work with him again. He is a great actor."

6 years ago nice to hear that's sameer n namrata like to work together ...

6 years ago Nice scene Namrata wtih you Kinshuk and Ankur, wishing you lots of success on your comeback !!