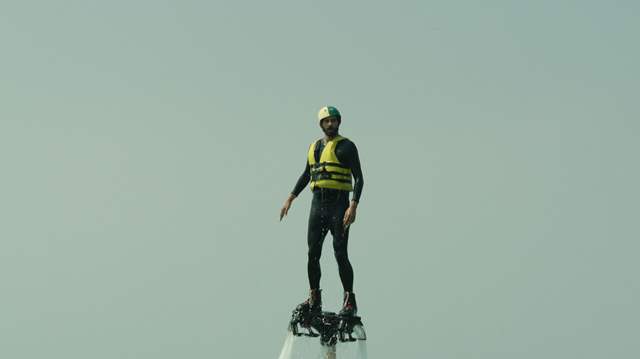 Actors at times have to overcome their fears to perform their parts convincingly for a role. A similar thing happened with Rahul Sudhir who plays Vansh in COLORS’ latest romantic thriller, Ishq Mein Marjawaan.

Rrahul plays the role of a white-collar criminal Vansh, who under the garb of manufacturing cutting edge water sports equipment, deals with illegal weapons and drugs. To play Vansh, Rrahul had to act like he is very comfortable around water. However, in real life, Rrahul is scared of water and he had to get rid of his fear for a crucial scene wherein he is flyboarding, i.e. gliding on water using specialized equipment.

Talking about his experience Rrahul said,  "I have always had a fear of water. Even on holidays with friends, I was that person who would prefer to sit by the beach and read a book rather than go in and swim. When I read the script for Ishq Mein Marjaawan, I realized that I would have to do several scenes on the seas as my character is described as the king of the sea. Soon enough, during our shooting schedule in Goa, I had to be on a flyboard and glide across the water. I had to make it look effortless so I trained for a couple of hours so that I would look natural. In fact, I took inspiration from Hrithik Roshan in Bang Bang for the scene, and while filming I just tried to forget about my fears and give my all to film a great scene. In the end, my efforts paid off and we shot an amazing, action-packed scene. Today, I am more comfortable being in water and I thank my character for making that happen for me!”

Rrahul Sudhir On Being Relieved That 'Ishq Mein Marjawan 2' Didn't ...