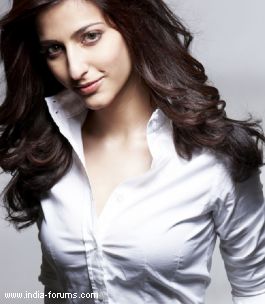 Actress Shruti Haasan, daughter of veteran actor-filmmaker Kamal Haasan, says her father has been very inspiring for her. She marvels at her father's dedication and says he has the same enthusiasm that a newcomer has for his work.

"He has been an inspiration for me, personally. Just the way I look at him deal with his career, how he works," Shruti said here.

"Even at this time, he does so much hard work and has so much dedication. He has the same enthusiasm that a newcomer has for his work and that has been very inspiring for me," added the 27-year-old.

Shruti is also impressed with her father's directorial skills and minces no words in praising him for that.

"He is a good director. He brings in an actor's point of view very clearly. When you see his film, you know an actor is thinking about how to direct the film," she said.

She doesn't rule out acting in a film directed by her father someday.

While in the former, she is paired opposite producer Kumar S. Taurani's son Girish Kumar, in "D-Day", she will be seen with actors like Arjun Rampal, Rishi Kaporr, Irrfan and Huma Qureshi.