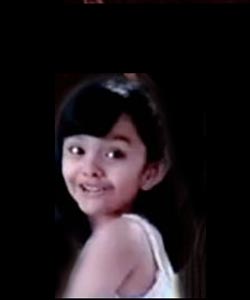 Muskaan Uppal, the little girl of seven years is the new entry in Star Plus' Kis Desh Mein Hai Meraa Dil. She comes in as the daughter of Prem (Harshad Chopra) and Heer (Additie Gupta), and will play a key role in bringing them together.

We talked to the girl's father Narendra Uppal who said, "My daughter will be playing the role of Chahat, daughter of Prem and Heer. She has a very interesting track".

"The six year leap in the show has already been taken, and Chahat lives with her mom Heer. Her dad Prem is not aware of her existence. Muskaan will enter the show tonight, 10th July and her entry scene is where she dashes against her father, Prem Joneja", states the little girl's father.

Muskaan has done nearly 25 commercials; the recent ones being an ad with Smriti Irani for Aquafresh. She also awaits the release of her debut film where she plays the daughter of Vinay Pathak and Rituparna.

Well, we welcome yet another tiny-tot to the world of television!!

May you continue to receive great success.

May you achieve your dreams and more.

May you current projects do well.

pihu07 11 years ago Keep smiling Additi...wishing you all the best!

11 years ago All the best and enjoy your time off Additi :D

+ 4
11 years ago Missing you guys...hoping to see you back soon. Wishing you all the best!

Made For each other

+ 3
12 years ago Thanks for the article.
All the best to HC, AG and Muskaan Uppal