The latest romantic comedy to look forward to is coming from none other than Karan Johar's Dharma Productions. Ek Main Aur Ekk Tu will see the unique pairing of Kareena Kapoor and Imran Khan for the first time! Amit Trivedi composes the music of this film while Amitabh Bhattacharya provides the lyrics. With the genre of the film, it's expected that there will be some fun filled songs in the album that will be quite an interesting listen. 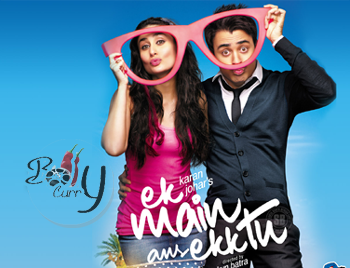 Aur Ekk Tu'. The fun theme in the song is present from start to finish and leaves you in a happy state. The song follows the journey of an inebriated duo through their talli adventures. Benny Dayal and Anushka Manchanda do a great job with the song and seem to be the perfect choice as their voices fit in with the music quite well. Shefali Alvaris is also included and makes her presence known in the fairly less time allotted to her. You'll end up tapping your foot along with the song by the time it's over.

There is also a remix version of 'Ek Main Aur Ekk Tu' with the noticeable difference being that it is aimed more towards being a club version with more dance friendly beats.

The next song in the album is 'Gubbare' which might just remind you of 'Dhoop Ke Makan' from Break Ke Baad. It turns out to be a soothing song, with a bit of a country feel to it. The song has Amit Trivedi, Shilpa Rao, Nikhil D'Souza, and Amitabh Bhattacharya coming together as a group to blend in with the music and make an impact on the listeners. While the song isn't 'hit material', it is definitely worth a listen purely for the calm and serenity of the music and lyrics.

'Auntiji' is next on the album. The name sets up the expectation of a fun, light-hearted song but fails to deliver through with certain parts not as enjoyable as one would expect. However, the music is quite catch and might have you doing a jig or two. Certain parts of the song will surely remind you of music from the 60's with the strong jazz elements used. Ash King's vocals definitely add to the song and seem like a well made choice.

'Aahatein' slowly and softly makes its way into the album in the next spot. Karthik starts this song out with a whispering tone, with Shilpa Rao joining him later in a similar tone. The music of the song is also soft which makes it quite calming to listen to. 'Aahatein' turns out to be one of the best songs of the album with soft, soothing music and lyrics.

There is also a remix version for 'Aahatein' in which Shekhar Ravijani replaces Karthik. Shilpa Rao still makes her presence in the song and both manage to keep the same effect that the original version did. Although there are a few more beats that are added in, the song still doesn't lose the charm that the original had.

The last song in the album is 'Kal Chalna Shuru Tu' with lyrics that hint towards the ideal happy ending. Vishal Dadlani and Shilpa Rao lend their voices to the song with different tones and moods that seem to work quite well together. As the last song of the album, it turns out to be something different and interesting to listen to.

Although the album presents a narrow variety of choices, what's included is definitely worth a listen! Our only complaint would be that they did not include enough of a variety to appeal to a more universal audience!

Nawazuddin Siddiqui Waited 20 Years to Work with Sudhir ...
9 minutes ago

Rakul Preet Singh confesses to being a part of drug chats ...
39 minutes ago