Yet another Aamir Khan production is around the corner, this time starring nephew Imran Khan - it's none other than the long-awaited Delhi Belly!
In a change of pace from the heap of romantic comedies the young star has featured in thus far, this one is a buddy flick of three friends, and Imran's character in particular is supposedly quite out of the ordinary. Costarring along side Imran in this flick are Vir Das, Kunal Roy Kapoor, Poorna Jagannathan, and Shenaz Treasuryvala. Right from the first promo, viewers have been able to discern that this film will 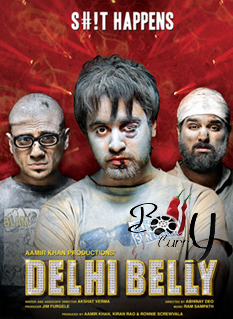