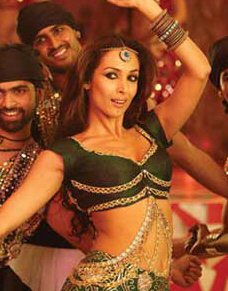 Controversies never seem to end for the latest chart-buster "Munni Badnaam Hui" from Arbaaz Khan's super hit movie Dabangg. After the recent news about the Zandu balm makers filing a legal suit against the producer for using their name without their permission, issues raise yet again and this time, for lifting from another song.
Apparently, the music is copied from the 1992 Pakistani movie Mr. Charlie, starring the comedian-actor Umer Sharif. The original song is  "Ladka badnaam hua haseena tere liye".

Upon hearing uncanny resemblance to his song, the Pakistani actor was livid and as per reports, is thinking of pursuing a legal course of action to set it right. On the other hand, the composer of the apparently copied version, Lalit Pandit, refutes the claims.

More so, we've also heard that there is yet another older version to the Pakistani version. It is a very old U.P. Folk song "Chora Badnaam Hua Nasiban Tere Liye" from which lot more film makers were inspired and numerous versions of the song were made.

So is Umer Sharif doing right by raising this issue? We, at BollyCurry just hope that this song doesn't get badnaam anymore.