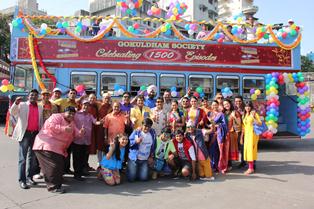 Produced under the banner of Neela Telefilms, Cult Comic Daily Taarak Mehta Ka Oltah Chashmah' is completing record 1500 episodes. In its usually unusual manner, Gokuldham society members decided to celebrate the day in a unique manner. So the entire society members got on an open bus and went for a complete mastiwaala Mumbai darshan.

Says the producer Asit Kumarr Modi, "Gokuldham Society is reflection of various societies in the city. So to salute the cosmopolitan all accepting spirit of Mumbai and it's people we adopted this very unique and innovative way. All members travelled in an open bus all over the city, celebrating completion of 1500 episodes of this daily comedy. It felt as if we were celebrating with people of Mumbai."

Adds Dilip Joshi, "It was so much of fun. We traveled all the way  Dancing, cheering and having full dhamaal. People en route encouraged and clapped for us. It cannot be described in words. So watch the episode on 17th September."

Actors boarded this decorated bus from their society. It had balloons, pictures and colourful banners all around. "itna maza ayaa.  So much fun. It was like live TV show for audience. It was tiring because there was no chance of retakes but who cares." Says Disha Wakani.

Adds Ambika aka Mrs Hathi, " Hahaha... People are so excited. They were calling us by any name. initially they would get confused and then as soon as they realized that its the real actors in the bus, they would start following us. I can understand people getting confused between Roshan and Babita because both are lean tall n fair... But they have called me Madhavi and Anjali. It was great experience. Crowd went berserk  recording Dayaben's live garba . There was lots of crowd."