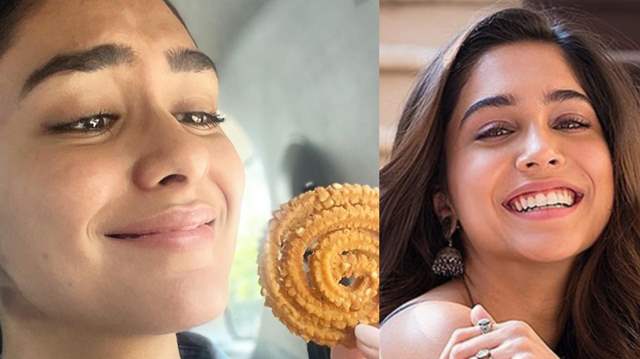 Mrunal Thakur’s latest film Sita Ramam has fetched her some great reviews, and done equally well at the box office too. The actress won hearts across all quarters when the Hindi version was released. Well that is not the only thing that makers the actress happy, Diwali snacks also are her favpurite and here's the proof.

Mrunal took to her social media account and shared a exited picture as she relishes on Diwali special food chakli and Karanji. The actress can be seen sitting in her car donning a denim shirt. Sharing the picture she wrote, "Dabba 🥹 #chakliiloveyoutothemoonandback #karanjee- kuthe Hotis tu 😭''.  Well the pictures were so cute that Bunty aur Babli 2 actress Sharvari Wagh couldn't help but comment on the same. Sharavi wrote, "Shankarpale feeling fomo bro"

Well fans too loved her quirky pictures and they too started naming their favourite Diwali snacks in the comment section.

Talking about the workfront, Thakur will appear opposite Abhimanyu Dassani and Paresh Rawal in the multi-starrer comedy Aankh Micholi. Following this, she will be seen with Ishaan Khatter in the war action film Pippa. She will also be seen playing the role of a police officer alongside Aditya Roy Kapur in the Hindi remake of the 2019 Tamil film Thadam.

+ 6
3 months ago Diwali is indeed incomplete without faraal 😅😂