View Profile
Movie Review: Money Hai Toh Honey Hai
Money Hai Toh Honey Hai hits the box office with a lot of expectations with a promising starcast that includes the Comedy King Govinda and talented actors like Manoj Bajpai and Archana Puran Singh. Yet there is something about this film which just hasn't clicked with the audiences. 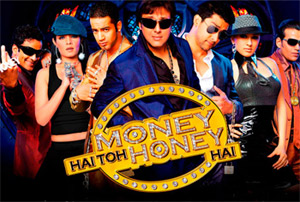 
After many comedy duds this year, Money Toh Honey Hai is another comedy attempting to ask the viewers to leave their brains at home. The word "sense" does not come in the dictionary of the makers as the film lacks in substance.

Money Hai to Honey Hai is the story of 6 different characters. Bobby (Govinda) is a happy go lucky kind of guy, who lives for today, doesn't bothering much about the future. Lala Bhai (Manoj Bajpai) wins a lottery and becomes wealthy, but within months he's on the roads as he's not a good businessman. Gaurav (AftabMoney Hai Toh Honey Hai Shivdasani) works as a copywriter in an ad agency. He's an honest and sincere guy and it shows in his honest ad campaign. He gets fired from his company and dumped by his girlfriend. Manik (Upen Patel) is a struggling model, but his endorsement is limited to cheap undergarments so far. He comes in contact with Dolly Kumari, a successful and single middle-aged fashion designer (Archana Puran Singh). Hoping she may recommend him for a bigger campaign, he sleeps with her, against his wish though.

Ashima Kapoor is a very successful TV star but she's not happy with her career and desperate to do films as lead heroine. She finally gives up TV and waits for the right break, but her goody-goody ideal daughter-in-law image still haunts her and she only gets offers for supporting actress. Shruti (Celina Jeitely) is a struggling dress designer, who sells her designs to Dolly Kumari in cheap price. Dolly Kumari puts her own tag and sells the same clothes in more than double price. One fine day, they all get an SMS from some Mr. Jaiswal, who tells them they are the owner of his group of companies. Initially they ignore it but finally arrive at the resort. After the formalities of transferring the ownership, they are very happy and in a celebration mood but it doesn't last for long. The lawyer reveals that there's a loan on the company and they must repay it and till they repay the loan, they would be house arrested. 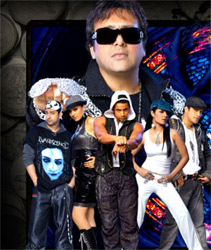 Don't expect many laughs from the film, as the situations just aren't comical. The story is filled with tangents and just doesn't entertain. Songs come out of nowhere and lack in melody and become irritating for the viewer.

Govinda known as the king of comedy is quite disappointing in the film. After hits like Partner and an excellent act in Saalam-E-Ishq one is left wondering what attracted Govinda to this film? His character does not match his age and neither does he look good with Hansika who is less than half his age. Manoj Bajpai also does not live upto his talent. Celiena, Hansika and Aftab don't leave any positive impacts as actors either. The only relief in the film are Upen Patel and Archana Puransingh who manage to play their roles convincingly.

A bad script, poor storyline, and a waste of absolutely great talent makes Money Hai Toh Honey Hai a below average fare. Get ready to be disappointed as the ingredients of this film create a not so great tasting film, which won't fare highly at the boxoffice!

Bolly Curry Rating: Â½ Chilly Out Of Five. Brainless comedy with no story and horrible delivery.