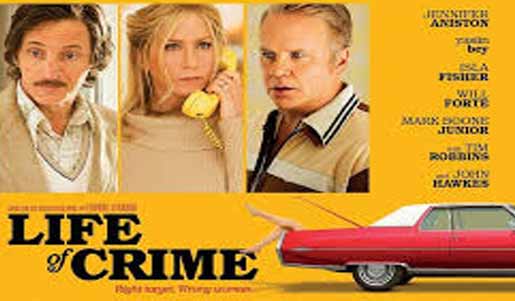 If you're expecting a heavy duty, crime-laden, back alley action film, this is not it.

Set in 1978 in Detroit, "Life of Crime" is an intriguing suspense story about a set of small-time criminals who kidnap the wife of a well-to-do estate developer and demand a million dollar ransom for her release.

Louis (John Hawkes), along with his partner Ordell (Yasiin Bey), after discovering some of the financial secrets of Frank Dawson (Tim Robbins), a real estate magnate, decide to kidnap his trophy wife Mickey (Jennifer Aniston) when he goes on a trip to The Freeport, Bahamas.

The kidnapping is interrupted by the unexpected visit of Marshall (Will Forte), a family friend of the Dawsons, who shows up with the intention of having sex with Mickey.

The inept criminals after dealing with Marshall hold her captive in the home of one of their creepy friend, Richard (Mark Boone Jr.), a neo-Nazi with a peeping-tom problem.

Now on tenterhooks, they tell Mickey, "We don't know Marshall and what he has got to lose. But we wonder if he would stick his neck for you." And truly he does not.

Soon, hoping to extort the ransom, they call Frank and threaten him to pay the ransom or "you'll never see your wife again".

But to their surprise, they learn that he has filed for divorce and is going to marry Melanie (Isla Fisher), a younger and sexy woman who has her own agenda.

As expected, "Life of Crime" ends with a surprise alliance that makes perfect sense of random justice.

There's a fine chemistry between each characters but the script does not give them enough space to explore the depth of their relationships, making the entire effort a superficial 'sitcom-ish' farce.

The period of the late 1970s is well captured, with good production values and authentic background score.

Unfortunately, this faithful adaptation of Elmore Leonard's 1978 released novel "The Switch", which in turn has been inspired by O' Henry's 1907 published short story - "The Ransom of Red Chief", has been beaten to the punch by the similar cultural tropes seen in earlier films like "Too Many Crooks", "Ruthless People", "The Ref" or "Hostile Hostages".

Nevertheless, "Life of Crime" is an engaging film, worth a watch on a lazy weekend afternoon.