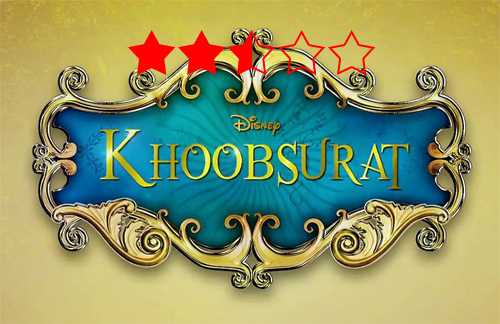 Seasoned actress Rekha's highly admirable film Khoobsurat has left its charm and is still remembered by the audience for the outstanding performance of the stars. But the remake of this classic film fails to deliver the same aura and charm which the original film had. Khoobsurat is not as delightful as expected. The film has its sparkling moments, but most of the time it's slow paced (especially the first half).
The film traces the story of Dr. Mili Chakroborty, a physiotherapist of Kolkata Knight Riders, who agrees to go to the royal Rathore family to treat the king and there she meets the suave Yuvraj Vikram Singh Rathore. King Shekhar Singh Rathore is not willing to get treated, which gives Mili an ample of time to fool around in the palace. In the meantime Mili gets a chance to go on a short trip with Prince Vikram and meets King Sumer Singh, and just like any other Bollywood film the hero and the heroine fall for each other.
Obviously we cannot expect Sonam Kapoor to match Rekha ji's acting prowess, but her character was more exasperating than convincing. She was bubbly, chirpy but her character had some cliche details like bumping into things where ever she goes (isn't this has been repeated too many times for a character like this). Fawad Khan was good and charming but his gestures were somehow not convincing enough to accept him as a prince. Aamir Raza, Kirron Kher and Ratna Pathak Shah, as always were great and will keep you laughing throughout the film.
Coming to the Music of the film, the songs composed are great and played at all the right moments. 'Engine ki sitty...' and 'Abhi toh party shuru hui hai' have already become a hit and can make anybody tap their feet. 'Maa ka phone aaya' will make you laugh every time Sonam's phone rings in the film.
Khoobsurat is a light hearted film which needs no brain. The first half is slow with less comedy element in the film which will make you wait for the intermission. However, second half picks up in terms of comedy but the storyline is somewhere lost. Though Sonam Kapoor's Khoobsurat was able to create the buzz with its funny trailer and catchy songs, but due to lack of storyline and poor script the film could not create the lasting impact.
Varsha B.