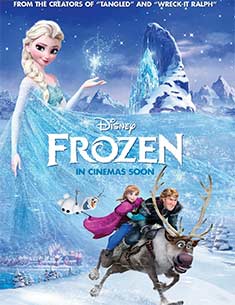 When the vivacious little sister Anna (Kristen Bell) pesters her older sister Elsa (Idina Menzel), "The sky is awake, so am I, so, I need to play", you realise that there is more to just the sisterly bonding.

One fine day, while playing, Elsa accidentally strikes Anna and she freezes. Not knowing how to cure the little one, the king rushes his daughter to a wise old troll king who tells him that princess Elsa is "cursed or blessed" with a 'Midas touch' like phenomenon, but instead of gold, her touch or strong emotions could freeze everything she touches.

The best way to avoid a similar situation would be to "keep her powers hidden from everyone including Anna". And the wise troll further advises Elsa, "Don't feel and don't show your emotions. Fear will be your enemy."

So, Elsa locks herself in a room to protect Anna from the dangers of her association. And as years pass on, Anna grows up to be a lonely princess craving for love and her sister's company.

On Elsa's coronation day, while Anna is a little nervous but overjoyed to see her sister, Elsa remains aloof with gloves on her hands. But Anna's sudden decision to marry Prince Hans (Santino Fontana) of the Southern Isles triggers Elsa's ire and this time she unintentionally freezes her entire kingdom by plunging it into a prolonged winter.

Scared, frightened and not knowing how to reverse the situation, Elsa goes into a self-imposed exile to a remote mountain peak, where she lives in an icy castle.

What follows is Anna's pursuit to get her sister back. She does this with the help of Kristoff, a commoner selling ice, Sven, Kristoff's high-spirited pet reindeer and Olaf, the carrot-nosed snowman whose body can be dismantled and rearranged.

The budgeted humour comes in the form of the Duke of Weselton (Alan Tudyk) and there is more drama and action.

Like a true classic fairytale, "Frozen" has elements of sunshine, fun, romance and tragedy. Being a musical, every element is connected with a number of songs, each better than the other. "Do you want to build a snowman," is infectious. And your heart does go out to Princess Anna when she sings, "For the first time, in forever" or "Love is an open door". The other powerful number is "Let it go".

The production design is worth a mention, especially the majestic mountaintop ice castle, which is particularly exquisite with its glittering details and sharp icy shards.

The co-directors, Chris Buck and Jennifer Lee have taken pains to see that every frame is picture perfect.

The animation style that they have used is the hand-drawn computer generated hybrid image technique. It complements the fanciful and cartoonish nature of the setting, making the scenery a lovely collage of sharp colours. The characters too have a human, life-like quality that will appeal to the viewers.

For a change, "Frozen", with its 3D effects has a 'cool' effect on you.