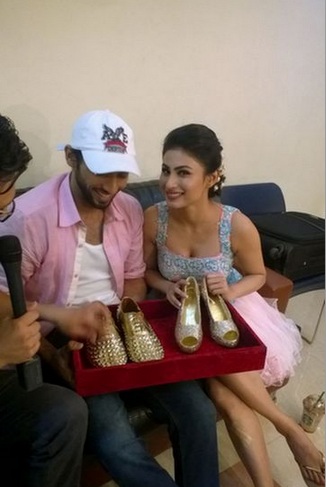 Colors extremely popular dance reality show Jhalak Dikhhlaa Jaa Season 7 has entered into its eight week now with the competition between the contestants steaming and heating up by each passing day.

Well, this week again there are some interesting things happening on the sets of this dance reality show. The challenge for the contestants for this week is to dance with the background dancers and also not along with their choreo partners.

In the opening episode of Jhalak Dikhhlaa Jaa Season 7 itself the judges had announced that the contestant who will show a radical progress and present some amazing performances will be given the golden dancing shoes. Living up to the challenge, Mouni and Punit had dance on the song Gayein Kyun from Dum Maaro Dum depicting long distance relationship through their performance. There was a wall that they used as a prop and the duo danced on the either side of the same.

Prior to Mouni and Punit, Akshat Singh and Vaishnavi had got these golden dancing shoes.

Well, team Tellybuzz wishes all the luck to Mouni and Punit and the rest of the contestants for all their future performances.

pallavi16 6 years ago How come a contestant who constantly keeps rocking the stage doesn't get these..but a contestant who's performance has be consistent gets these..I have nothing against mouni but it's high time jhalak and colors start playing fair!! If not colors shall be proving its unworthy character once again!

foram. 6 years ago i hope you guys win the jhalak trophy..
all the best Mouni Roy and Punit Pathak

NightonEarth 6 years ago Yayyy!!!!!! Congrats to Mouni and very happy fr her

chirpyhapibird 6 years ago This week perfect 30 for akshat
Cutie