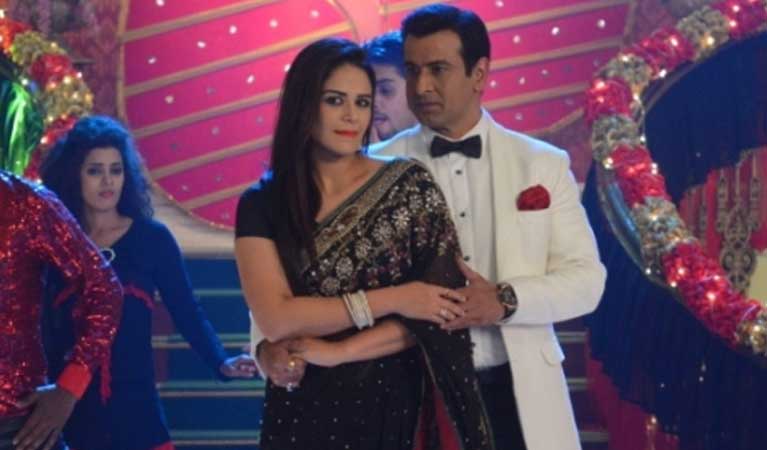 The cast of Itna Karo Na Mujhe Pyar recently shot for the sangeet sequence of Nishii aka Rhea Sharma and Jignesh aka Mehul Vyas. The sangeet which was shot on a grand scale saw four beautiful actresses Mona Singh, Pratyusha Banerjee, Aishwarya Sakhuja and Aashka Goradia groove with the handsome Ronit Roy who plays Neil on the song Deewangi from Om Shanti Om.

Since it's a color themed wedding, for the sangeet everyone were dressed in the combination of black and red. While Ronit looked dashing in a white suit, Mona Singh sported a black saree and red lips looking gorgeous on the dance floor. When someone complimented the talented actress on her pretty saree, Mona was overheard saying that she was not styled by any designer but was infact wearing a saree from her own collection. Apparently, Mona loves sarees and has a huge collection of different styles and colors of the traditional six yards.

Well, since she looked like a million bucks, we are sure her fans will be extremely happy to see her again on the small screen even though it is just a cameo!

6 years ago Pratyusha Banerjee is gorgeous and talented girl.

6 years ago Pratyusha Banerjee is the most talented actor and wonderful person.

+ 2
6 years ago Pratyusha Banerjee looking gorgeous in her Sari, love the way she is simply glowing like a star she is. Love to watch her dancing. She is so good at it.

6 years ago Ronit looks like he is James Bond in this pic.

6 years ago Pratyusha Banerjee is the best,she is excellent actress.