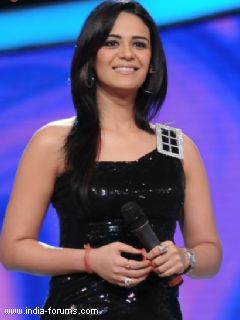 Mona Jaswir Singh is back to pavilion. Almost six years after featuring as Jassi in the hit show 'Jassi Jaisi Koi Nahin', the actress is returning to fiction shows with 'Bas Itnii Si Baat', to be aired on Sony.

If one goes by the first look of the actress in the show, she seems to be playing a simple middle-class, sari-clad housewife and it is coming from Ekta Kapoor's stable.

Mona began her acting career as the bespectacled simple girl Jassi, and her real identity was revealed much later in the show, which also happened to be on Sony. Her glamourous avatar won her appreciation, and that set the ball rolling for her in showbiz.

Mona went on to participate in dance reality show 'Jhalak Dikhhla Jaa' in 2006, and ended up being the winner.

Her effervescence and charm gave her the chance to host the second and fourth seasons of the show, as well as anchor other shows like 'Entertainment ke Liye Kuch Bhi Karega', 'Shaadi Teen Crore Ki' and recently 'Star Ya Rockstar'.

Mona was also seen in a role in '3 Idiots', alongside top actors like Aamir Khan and Kareena Kapoor.

But now, she is back to acting on the tube.

9 years ago good, am hopeful it will just as good as BLAH

+ 6
9 years ago welcome back Mona.
cant wait to see you in a new role.
you were rocking as Jassi.

9 years ago Sari-clad Mona should be interesting :) ...am eagerly waiting for her new show. However, she did do a cameo in Radha ki Betiyan after JJKN, and also a short film for Zoom tv opposite Rohit Roy, so it's not like she didn't fiction all this while.

+ 3
9 years ago I am really happy To see mona making a comeback on television, would have wished a sequel of jjkn with her armaan sir, but I guess she is planning to go a new show with a different storyline, after the success of balh ekta has roped in mona for her new show bas itni si baat, good luck Mona you are still my armaan jassi will watch your new show

+ 3
9 years ago I haven't seen her serial.. But she's a really good host... and really beautiful and she did awesome in 3 idiots.. So I'm looking forward to this. :)

+ 3
9 years ago wow I am very happy Is Armaan sir (Apurva darling..!!)
coming back with her is my BIG Question..I adore them together..But anywayz..all the best..!!Love ya..!!