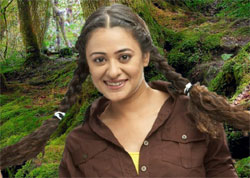 After Shweta Tiwari's turn to hear abuses from Aakashh, it now seems that Mona Vasu is the next 'Bakra' for the Bad Boys of the jungle!!

Well, we all know that the nine celebrities share the same loo in the Ghana jungle. But it so happened that when Chetan wanted to use the loo desperately, Mona was engaging it. And out came a dialogue from him, "Ohh, I don't want to use it after Mona".

Later, he and Aakashh were seen discussing how not a single mosquito has bitten them so far, but in the case of Mona all is different, as there is always a heap of mosquitoes ready to bite her!! To this, Chetan replied, "That's because she is a buffalo, and she stinks like a buffalo man"….

Well, wonder how Mona will react to these stinging abuses which have gone very nasty now!!

13 years ago lol..n what r they swines spreading swine flu??

13 years ago okay this was expected of akash but chetan seemed to be a sweet guy....

13 years ago mona is cute...why these guys are behaving like this..

+ 8
13 years ago Aakash has definitely lost his mental balance !! No manners at all !!!

+ 2
13 years ago How mean! These people have no class or respect for anyone!

+ 5
13 years ago how mean yaar!!!sta aakash and chetan look like buffalos demselfs!!

13 years ago akash and chetan are frustrated and they r showing their third grade selves on this show. cheapies like them can go to any extent for publicity

13 years ago so rude yaar, saddest people..dey know she is competition to them dats y dey r saying all dis