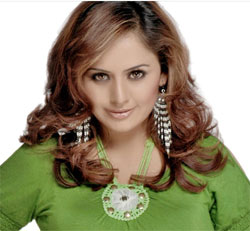 Mitika Sharma who plays Anusha in Star Plus’ soap Santaan recently met with an accident, when her car banged into another car.

“Luckily I escaped unhurt, but my new car which was just two months old is badly damaged”, quips the actress.

“My car banged into another car, and I ended up paying for the damage of the other car too. I have a new driver, so could not blame him too for the damage done”, adds the actress.

If this accident was a bad a start to the New Year, Mitika had more coming in the same week, as she fell ill with viral fever. “I am suffering for the past few days with high fever, but I am thankful to my production house as they are very supportive”, concludes the actress.

Mitika whose character of Anusha was grey in Santaan will turn positive now, and wishes to get back to her husband Kartik (Sudeep Sahir).

We hope Mitika has happier days ahead in the New Year…

Angel-A 11 years ago thats sad.. ow she is turning positive.. wil b good to wtach..

PrInCeZz07 11 years ago aww
no thats sad
get well soon

Bigg Boss 14: Abhinav Shukla tells a terrifying story of getting ...